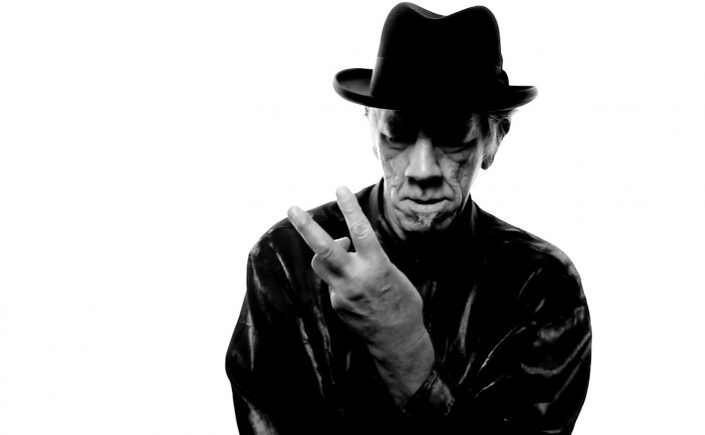 An Interview with Watermelon Slim

In an age of dime-a-dozen blues guitarists whose chief calling card is their technical proficiency, Watermelon Slim is a cherished exception. A bold, blatant personality who actually has something to say.

His success – modest as it is – owes less to effects pedals and vintage axes than to his ability to communicate universal truths. Listening to Slim, one is constantly confronted with the human struggle. For a brief, heady period roughly a decade ago, it looked as though the blues community had found – in this late-blooming Vietnam vet turned truck driver turned country bluesman – a working class hero for the long haul.

“I had a peak. That was my peak,” says the man born William Perkins Homans III in Boston, four years after the end of the Second World War.

We’re seated in the low-hung backstage area of a popular Belgian venue, its walls covered in the Sharpie pen graffiti of a 1000 bands that came before. Across a table, I confront the slack, pocked face familiar to me from his album covers; Watermelon Slim’s piercing, lake green eyes catch me unawares.

A boxed pizza has been brought in for pre-concert consumption, yet Slim, or Bill (but not Billy), is keen on talking. He’s got lots to complain about – specifically, the economics of a music industry that has left him in the dust. He can sound bitter about his gradual fade from the spotlight in one breath, and in the next, rationalize it as nature taking its course.

“It’s exactly as it should be,” says the self-proclaimed geopolitical and economic analyst. Then, in a brutally honest act of self-deprecation, he recites a laundry list of reasons.

“I have no looks. I cannot smile. I have no teeth. I’m an old, battered-looking man who is not a virtuoso musician. It’s exactly as it should be.”

Slim’s excessive modesty is the first of many surprises during an hour-long talk that will touch on politics, sexual proclivities, Jungian psychology and his lifelong affection for the game of baseball. “I’m like Tim Tebow. I’m a Class A minor league musician,” he continues, comparing himself to the former NFL quarterback currently roaming the outfield for the St. Lucie Mets. He is – or has been – much more than that. The many hats he’s worn and countless obstacles he’s faced inform his music, as does the overriding feeling of never having fit in at any point along the way. “I have lived the blues life!” he proclaims, knowing full well that his colorful past, chock full of broken relationships, lost jobs and an inordinate amount of dues-paying, gives him a leg up over the imposters.

Blue collar? Sure, at first glance. But this son of an influential civil rights lawyer has flirted with academia and professional employment throughout his life. He tosses ten-dollar words around like it’s no big deal. His privileged upbringing led to an aborted stint at a small Ivy League college in 1968; his first impulse after leaving the school was to join the army, see the world.

“In my naïveté, I enlisted. Just as my father and my grandfather and everybody else had done, going back to my relation Samuel Adams. We always went. We’ve been patriots in my family ever since there was anything called the United States of America.”

His tour of duty with the 1st Signal Brigade in Vietnam changed him forever. He would become a staunch opponent of the war in Vietnam, an active protestor and lifelong member of the organization Vietnam Veterans Against the War. At the same time, his interest in the blues began to manifest: Slim is said to have taught himself to play upside-down, left-handed, lap-style slide guitar (using his Zippo lighter as the slide) during a wartime hospital stay. His first album, the curiously named Merry Airbrakes, would appear in 1973 and remain his only recording for the next 25 years.

He rekindled his academic career in the 80s, earning a degree in history and journalism, but proved too salty for the editorial offices of the third-smallest daily newspaper in Massachusetts. After one too many run-ins with his boss – a man he describes as a “dry drunk World War II marine” – Slim packed it in.

“I’m a little bit more inclined (than most people) to tell somebody to go fuck yourself. Eventually I had to tell him to go fuck himself. In no uncertain terms. I never had another journalism job.”

He went on to earn a master’s degree at Oklahoma State in the 1990s, simultaneously taking home a regular paycheck as an educator. By that time, he had a wife and child to support and wanted desperately to find his footing in the workforce. “I was trying to keep it together. I was trying to be a school teacher.”

Those hopes, too, ended in disillusionment.

“I do not fit the parameters of an American white collar, middle-class professional in a job in which public relations is the primary factor,” he says bitterly. His fatal flaw in this regard: Watermelon Slim has no teeth.

The back story, for anyone who has wondered why this award-winning musician does not invest in a set of dentures: “I have plates and pins running down both sides of my jaw from being left for dead after a mugging. I have one implant base in the side, and also a hole going up to my brain on the other side of my palate. I have huge bone loss. There is no chance that I can ever have any teeth. It’s gone.”

Slim relates how a school superintendent couched his dismissal from the school in legalese.

“Mr. Homans, your lack of teeth is an effective bar to your professional employment.” He considered taking the issue to court, but was quoted prohibitive legal costs for a case unlikely to succeed. “So I’m out as far as being a professional anything.” 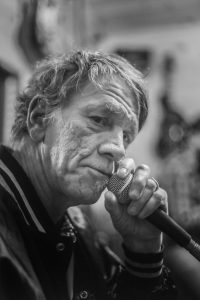 What was left? Manual labor. Over the years, Slim has toiled as a watermelon farmer (thus the name), a saw miller (which cost him the tip of a finger) and in the cab of many an eighteen-wheeler. To him, the road was forever a refuge and a place where he could write songs.

“Five days after I got my master’s degree, I was back in a truck. I don’t need to look like anything to drive a truck. Just get objects A and B from point C to point D without letting Smokey Bear run me down.”

He’d always made time for music. Many of the songs Watermelon Slim has recorded in the past 15 years, in fact, emerged during his decades-long search for direction. While still at Oklahoma State, he teamed up with a pair of philosophy professors to form Fried Okra Jones, a rootsy trio that released an eponymous EP in 1999. His subsequent solo records Big Shoes to Fill (2003) and especially Up Close & Personal (2004) put him on the map once and for all. His approach was largely acoustic and charmingly eccentric, echoing the heroes he name-checks on Personal‘s “Archetypal Blues”: Robert Johnson, Muddy Waters, Mississippi Fred…

“Up Close & Personal and Big Shoes To Fill before it were my last chance to do anything,” he reflects with an air of grave determination. “I was driving a waste-hauling truck (at the time).” The gritty, blue-collar songs on those albums, echoing the work songs and field hollers of bygone generations, resonated with a great many blues fans, ultimately allowing him to quit truck driving at the age of 55. He then formed the electrified Watermelon Slim & The Workers, going on an impressive run of three albums that earned him 16 Blues Music Award nominations, including Band of the Year and Album of the Year honors in 2008.

The adulation was certainly welcome. But now that he’d arrived, he wasn’t about to let anyone tell him what to play or how to sound. In 2009, he released what he calls “the greatest truck driving record of the 21st century”: The Nashville-recorded Escape From The Chicken Coop effectively straddled the line between rough-and-ready roadhouse blues and country twang. 2010’s Ringers offered an even tangier flavor of honky tonk. His change in direction, though subtle, left some confused, including the head of the label responsible for his records with The Workers. Slim’s blood boils just thinking about it.

“Escape From The Chicken Coop sold maybe 3000 copies, because they refused to promote it the way I – a truck driver – knew it had to be promoted.” He punctuates every third word with an adamant poke at the tabletop. “Had I sold one copy to one percent of American truck drivers, regardless of who else bought it, I’d have sold 200,000 copies. That’s twice the most liberal estimate of everything I’ve sold in my career.”

From his home in Clarksdale, Mississippi – a modest place he bought while peaking commercially a decade ago – Slim has been keeping a close watch on his recent record sales. Considering the uniquely powerful nature of his music, the figures are mind-bogglingly small. They have left him scrambling to keep his neck above water or even afford to pay his musicians.

“I’m ashamed to hire people. I’m embarrassed to even be a band leader.” His voice, which is a veritable roar when he is most animated, shrinks to a whisper.

(Watermelon Slim still has a lot of fight left in him. In part two of our interview, he talks about his extraordinary new record Golden Boy and why it’s hard to concentrate on music when you’re a socialist revolutionary.)