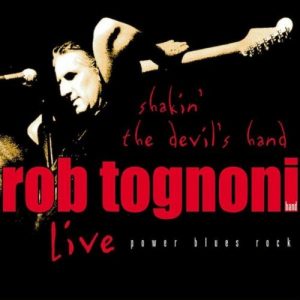 “Baby Please Don’t Go” needs little if any introduction. Most every music fan will have his or her favorite version of this oft-covered tune, originally popularized by Delta bluesman Big Joe Williams in 1935. For some, it will be the 1964 single by Them featuring a 19-year-old Van Morrison on vocals. Or the blistering take AC/DC included on their 1975 debut album High Voltage. Blues-minded folk can debate the merits of any number of versions, including those by Muddy Waters, B.B. King, Big Bill Broonzy, John Lee Hooker and Sam “Lightnin'” Hopkins. (The latter is the essence of cool on his version.)

For sheer firepower, look no further than Australian bluesrocker Rob Tognoni, who has been performing the song for as long as he can remember. It’s easy to decipher which of the above-mentioned versions of “Baby Please Don’t Go” inspired Tognoni’s razor-sharp, full tilt rendition.

“I first saw AC/DC live back in 1975 when they were touring Tasmania,” recalls the Tasmanian-born gunslinger of his fellow Aussies. “They were promoting their second album release T.N.T. Before that, I had discovered them on a weekly national music TV program called Countdown. They performed their version of ‘Baby Please Don’t Go.’ Bon was dressed as a school girl and Angus, of course, as a school boy. The band had a sense of humor. I immediately liked them!”

Here’s the TV appearance that caught the teenaged Tognoni’s attention, highlighted by an amiably demented call-and-response between singer Bon Scott and lead guitarist Angus Young at around the two-minute mark:

“Years later,” continues Tognoni, “I incorporated the song in my set, basing it on the AC/DC version I saw when I was 14. We played it at the Midtfyns Festival in Denmark back in 1996 and the performance was recorded by the national radio station. I got hold of the recording and picked ‘Baby Please Don’t Go’ as a track on my second album Headstrong. I still have it in my set today and probably will until I’m finished.”

A sizzling performance of the song at the 2003 Sweden Rock Festival was also captured for posterity and later included on Tognoni’s Shakin’ the Devil’s Hand.