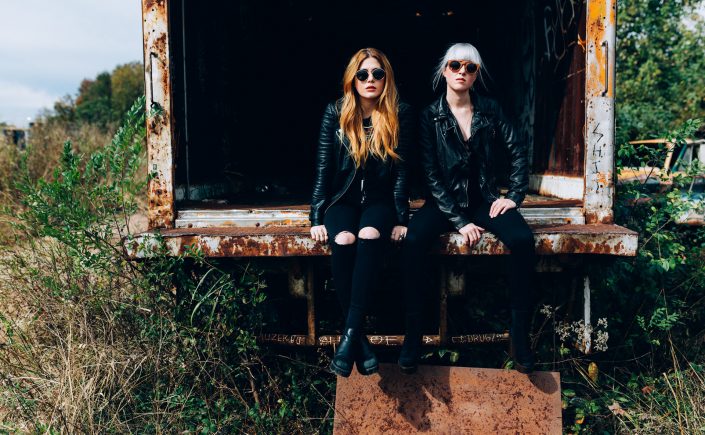 Sisters Are Doin’ It For Themselves

A Q&A with Larkin Poe

If you happen to be one of the 250,000 people following Larkin Poe on social media, you probably noticed more and more blues turning up in those little spur-of-the-moment videos they post on a regular basis.

Megan and Rebecca Lovell – the Georgia-born sisters that comprise Larkin Poe – share much of their creative life online, letting listeners in on what shapes them musically. In the past, you might have seen them experimenting with the Allman Brothers or Fleetwood Mac. More recently, seminal bluesmen like Son House and Robert Johnson have been getting the Larkin Poe treatment. The duo’s backstage video of House’s “Preachin’ Blues” has over 50,000 views on YouTube. An a capella version of “Black Betty” filmed inside a shower stall has surpassed 80,000.

By sinking their spades deep into America’s musical soil – always with respect, but with no qualms about making the classics their own – these two very talented siblings have obviously struck a chord.

Hailing from a little town roughly 70 miles northwest of Atlanta, Rebecca and Megan Lovell began making noise as two-thirds of The Lovell Sisters, a rootsy trio that included their eldest sister Jessica. Between 2010 and 2014, Rebecca (lead vocals and electric guitar) and Megan (vocals, lap steel, dobro) – naming their duo Larkin Poe – released five EPs and their full-length debut KIN. Reskinned followed in 2016. While not a blues act in the strict sense of the word, their gutsy performance at the Grolsch Blues Festival in Germany that same year showed an uncanny ability to connect with the diehards. Backed by a brawny rhythm section, their electrifying southern-flavored rock and soul was impossible to resist. 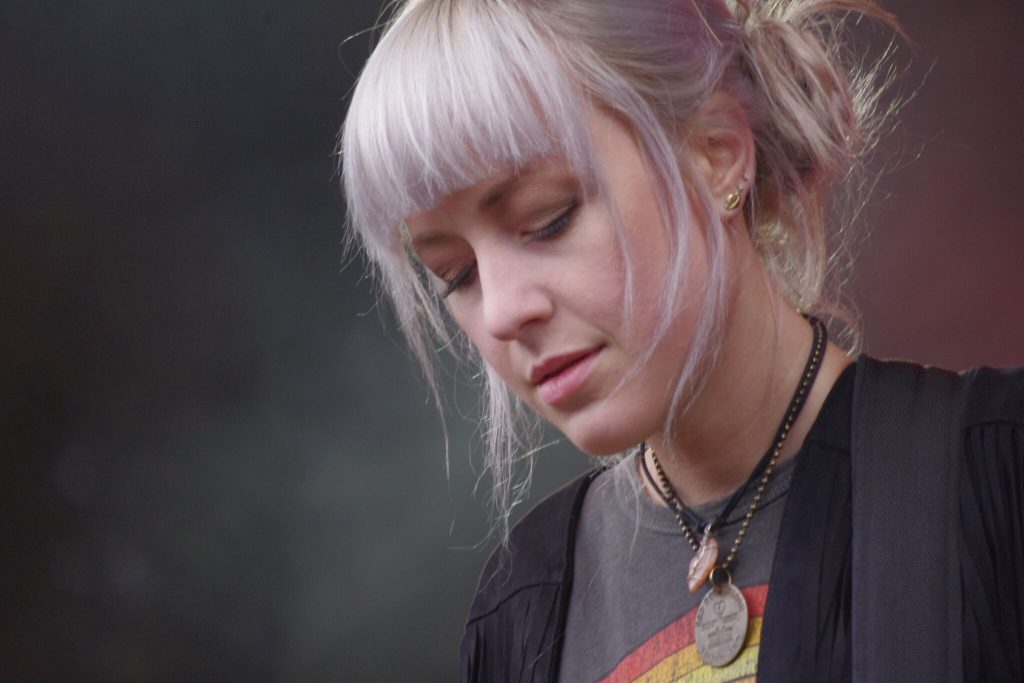 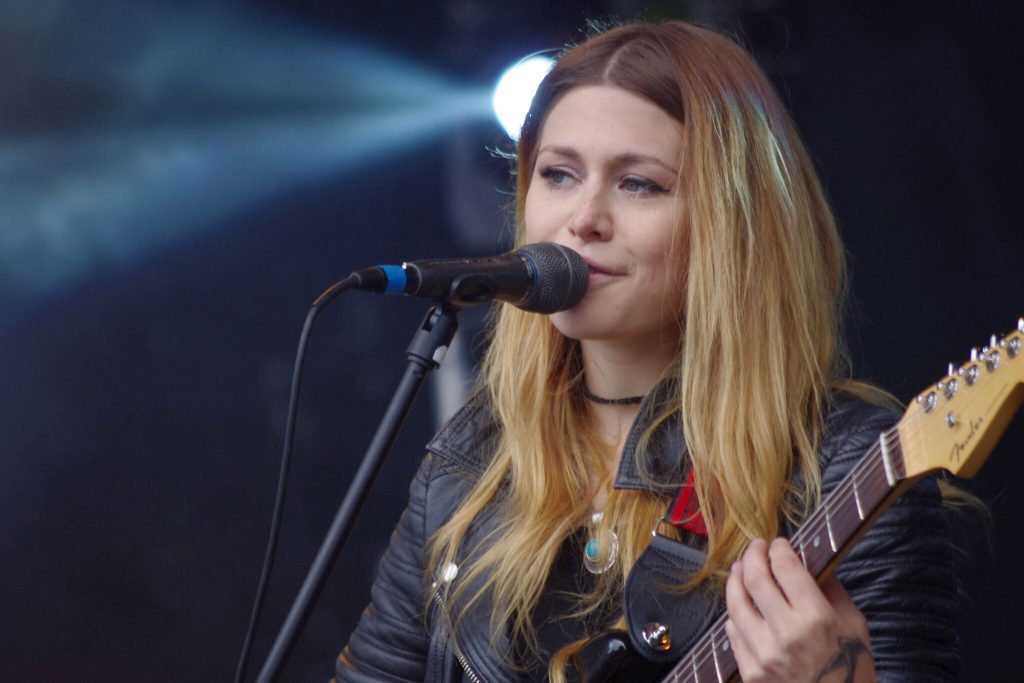 They’ve played huge events like Glastonbury, toured extensively as Elvis Costello’s backing band and opened shows for Queen and Bob Seger, so they haven’t exactly been flying under the radar. This year, they took part in the MusiCares gala honoring the late Tom Petty as Person of the Year. “Getting asked by T-Bone Burnett himself to come perform onstage with legendary artists such as George Strait, Taj Mahal, Elle King, Don Henley and Nora Jones — performing Tom Petty songs — was a dream come true,” says a grateful Rebecca Lovell.

Who Is Blues: After Reskinned helped you gain a certain level of mainstream exposure, an album that includes songs by Son House and Robert Johnson comes as a surprise. What led you to dig deeper into the roots of the blues?

Megan Lovell: It just felt like the right thing to do. Our music has always been flavored by American roots music, but with this album, we wanted to dig directly into the heart of that tradition. Sometimes you’ve got to follow your gut, and we did exactly that with Peach.

WIB: Songs like “Preachin’ Blues,” “John The Revelator,” “Black Betty” and “Come On In My Kitchen” have been covered often in the past. Which versions did you style yours after?

Rebecca Lovell: We tried our best to deliver these traditional songs as authentically in our own style as possible. As a rule, all music is derivative — you can’t hardly help but be influenced by what has come before. But our goal was to carry these powerful old songs to a fresh, new place.

WIB: Megan, I feel you don’t get enough credit for your lap steel playing. Who have been your teachers or role models?

Megan Lovell: I think lap steel is definitely one of the more underrated instruments in music! I grew up loving the great classic rock guitar players – David Gilmour, Brian May, Lindsey Buckingham etc. – and tried to emulate them once I picked up the lap steel. My slide guitar life began on dobro though, so I listened to a lot of Jerry Douglas starting out. I knew pretty much all his recorded solos at one point in time. Lately I’ve been inspired by blues slide guitar, like CeDell Davis, an amazing slide player who used a butter knife as his slide. I also have to give a big shout out to my lap steel hero David Lindley.

WIB: Rebecca, there’s a certain toughness and “attitude” to your vocals. Are there any singers past or present, male or female, where you looked at them and thought, “That’s how I wanna be!”?

Rebecca Lovell: Chris Whitley is my vocal hero. Chris is a massively underrated American blues/roots artist who died in relative obscurity in 2005. I look up to him like no other artist.

WIB: I was watching the Audiotree Live session you did this August and appreciating the rhythm section. Yet when people talk about Larkin Poe, it’s rarely mentioned. Technically speaking, is Larkin Poe a four-piece or is the name synonymous with the Lovell Sisters?

Megan Lovell: Larkin Poe is my sister and I — Rebecca and I have been making music together for over a decade. Having folks out on the road with us to help make the show rock is fantastic. We love to rock! But the core of Larkin Poe always boils back to the Lovell Sisters.

WIB: Following up on that, tell me about the bass and drum contributions on Peach.

Rebecca Lovell: Believe it or not, Megan and I played every sound you hear on Peach. I played or programmed all the drums and bass tracks and, between the two of us, Megan and I covered all the keyboards and synthesizers as well. We wanted to keep it in the family.

WIB: Veering away from the blues … certain moments, the song “Pink & Red” perhaps, remind me of another Georgia band with unique vocal harmonies, The B-52s. Are you a fan at all?

Megan Lovell: As fellow Georgian artists, we’re certainly aware of The B-52s, but not hugely influenced by their music.

WIB: A favorite track of mine is Wanted Woman/AC/DC. Tell me about that song’s origins.

Rebecca Lovell: Leading into the recording of Peach, the idea for “Wanted Woman” had been kicking around the back of my head for a few weeks. I knew the song wanted to come out, but it took a few false starts for the right musical energy to sweep through and give those sassy lyrics a home. Marrying “Wanted Woman” and “AC/DC” together for the album was actually a happy accident, but they fit together like two puzzle pieces.

WIB: Let’s close with a blues question. I’d like each of you to give me a TOP and a FLOP related to the blues.

Rebecca Lovell: The top: “Dark Was the Night, Cold Was the Ground” by Blind Willie Johnson. The flop: Tasteless shredding!