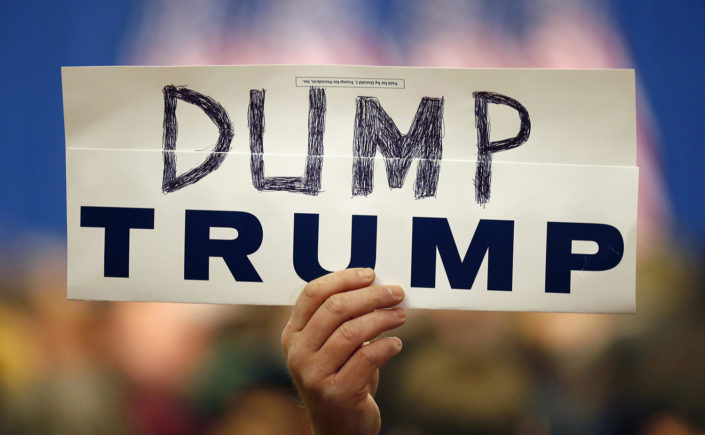 Thank you, Donald, for making the blues political again.

In the past five years, the man in the White House has pissed off a lot of people. Including a small army of blues musicians. They’ve felt compelled to speak up, literally in an effort to defend their country. Don’t believe me? Go enter “trump blues” on YouTube. You’ll find dozens of musicians, well-known and unknown, whose only outlet for the frustration and disgust they feel has been to write and sing about it.

The ten songs and videos I’ve chosen for this countdown to Election Day 2020 are some of the more eloquent and funniest blues protest songs of the Trump era. My fellow Americans, blues lovers everywhere … let’s do this!

Robert Cray wrote “Just How Low” during the 2016 election campaign. A few years later, he said if he’d known at the time just how bad things were going to get under a President Trump, he’d have taken off his kid gloves. Cray’s seething anger is visible in this live version from 2017. Best line: “If you wanna build a wall, build it around yourself.”

When The Cash Box Kings released “Build That Wall” around the time of the presidential inauguration in 2017, they claimed it was “not directed at people who voted for any particular candidate” but instead intended it as “a call for all people (…) to stand up and speak out for those who are mistreated or denied their civil rights because of the color of their skin, their ethnic background, their sexual preference, their gender, their religious beliefs, or physical limitations.” Still, songwriter Joe Nosek got off a few good ones. Best line: “Take your science and your facts, you can blow them out your ass, ’cause the unexamined life is where it’s at.”

Throughout his prolific career, singer/songwriter Eric Bibb has been a beacon of peace and love, spreading good vibes and hope for humanity wherever he goes. Having long since settled in Europe, the native New Yorker obviously doesn’t like what he sees going on back home. “What’s He Gonna Say Today” bristles both musically and lyrically. Best line: “You got a president addressing the nation, sounding like Family Guy.”

When Elvin Bishop, Willy Jordan and Bob Welsh first go to work on “Something Smells Funky ‘Round Here,” it appears they’re targeting corrupt politicians in general. As the song progresses, the source of the bad smell becomes increasingly clear. Best line: “This country is ours and we need to respect it, the guy we got in charge, I believe he’s trying to wreck it.” (Compliments to Aldo Panattoni for his work on this unofficial video.)

Never heard of Rocky Mountain Mike? I hadn’t either until this video turned up in my own “trump blues” search. It appears he’s a musical satirist and that no politician left or right is safe from his barbs. Published during the 2019 Ukraine scandal that led to Trump’s impeachment, it’s a side-splitting adaptation of the Bob Dylan classic “Subterranean Homesick Blues.” Best line: “You don’t need a weatherman to know his presidency blows.”

Never one for subtlety, Australian bluesrocker Rob Tognoni is one of Donald Trump’s most outspoken musical critics. In “Fat Orange Man,” Tognoni goes to town, using some variation of the “F word” no less than 29 times in under four minutes. At approximately one “fuck” every eight seconds, this must be some kind of record. Best line: “No heart for compassion, no heart to begin, this empty piece of shit in 2020 can’t win.” (Small quibble: Is Trump really fat?)

#4: Lucinda Williams, “Man Without A Soul”

Moving from the obscene to the downright depressing: Acclaimed singer/songwriter Lucinda Williams has got a reeeaal bad case of the blues on “Man Without A Soul.” Rolling Stone called this standout cut from her 2020 release Good Souls Better Angels a “mordant blues track that moves at a torturous pace.” If you can get through these oddly gripping five minutes without wanting to ingest a bottle of Clorox, you’ll find she never once mentions the man by name. Still, you kinda know. Best line: “How do you think this story ends? It’s not a matter of how, it’s just a matter of when.”

This low-down blues cut from Chicago mainstay Dave Specter chugs along on a churning boogie groove. It touches on hot-button issues like xenophobia and misogyny. It’s littered with searing electric guitar riffs from Specter and Rock’n’Roll Hall of Famer Jorma Kaukonen. What’s not to like? Best line: “Rich daddy’s dollars on a silver spoon, tellin’ lie after lie like a hot-air buffoon.”

Robert Cray has been known for decades for his soulful singing, slick guitar chops and affable manner. Politics hasn’t really been his bag. That makes his two-time appearance on this list all the more surprising. “This Man” first appeared on his 2020 album That’s What I Heard and more recently as the linked video, shot during the same year’s turbulent summer. The comment section on YouTube shows that artists like Cray – by speaking their mind – have risked alienating long-time fans on the other side of the political fence. Best line: “Get him out, get him out, get him out…”

Boasting dozens of A-list members of the blues tribe eager to shout out its three-word title, “Dump That Trump!” is our landslide Election Day 2020 winner. The fact that it’s a re-working of the Little Charlie & The Nightcats classic “Dump That Chump” isn’t important. What’s impressive is who took part in this anti-Trump jamboree: Charlie Musselwhite, Joe Louis Walker, Janiva Magness, Kim Wilson, Sugaray Rayford, Paul Oscher and many more. If Trump does in fact get his butt kicked this time around, this is the gang I’d want to celebrate with. Best line: “Think he cares about you? You’re a first-class chump. C’mon! Get real! We got to dump that Trump!”