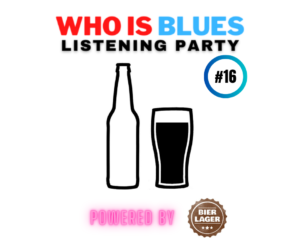 I’ve got a birthday coming up in … just a coupla hours. Yippie? I don’t know. At my age, I don’t get too excited about another tick on the calendar. Especially this year. The past twelve months feel very much like lost time I’ll never get back. No concerts, for one – aside for a couple of small, seated, socially distanced things. Live music sure, but not the same. A concert where you can’t hug your friends and can’t scream and fall down and go nuts can’t be anything better than OK.

I thought about cutting myself some birthday slack and not doing a Listening Party this week. Then again, one doesn’t get far in life by taking the day off. So here we are, sharing the time until midnight, when the “5” in my age becomes a “6”. Shooting the shit, as we do every week, about music, beer and life in general.

Today’s beer is called Hang Loose and I intend to crack it open shortly before the clock strikes twelve. If you’re expecting puns and wordplay related to surfing, I’ll have to disappoint you – I’ve never been near a surfboard let alone ridden one. (Does one even ride a surfboard?)

But hanging loose has other connotations and we’ll be doing just that with the great Howlin’ Wolf and his incomparable session bands from the 1950s and 60s.

Ready for a dose of some of the bitchinest blues ever recorded? I sure am … 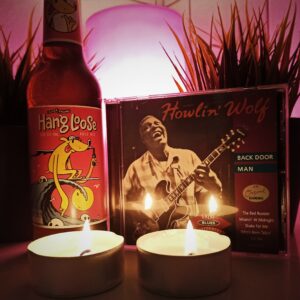 If you’re anything like me, you’ll have grown up with a warped and extremely limited idea of what the blues is. Until you’ve had intimate contact with this music, you’re liable to believe what many believe – that it’s slow and sorrowful and sung by poor old men. Even knowing the names of some of the genre’s legends – Muddy Waters, B.B. King etc. – isn’t enough to overcome those misconceptions.

That’s why Back Door Man – a budget sampler boasting 20 essential Howlin’ Wolf cuts – was so pivotal for me. Plopping this disc into the tray, pressing PLAY and hearing the two minutes and 16 seconds of wild, infectious energy that is “Shake For Me” literally shook my world. This is blues? This isn’t sad or sorrowful or any of those things!

Wolf in his prime was an absolute monster.

Back Door Man may have been the best $2.99 I ever invested. I was sorting through a bargain bin at Woolworth’s full of Neil Sedakas and Doris Days when it called out to me, together with a similar Etta James collection on the same obscure Dutch label Zillion. Yeah, it was cheap, and there’s very little in the way of track info or liner notes, but the licensed versions of Wolf’s original Chess Records recordings sound great.

Just the names of the players on the 1961 session that produced “Shake For Me” and its B-side “The Red Rooster” make a blues buff’s heart go boom: Wolf on vocals and guitar, Hubert Sumlin and Jimmy Rogers also on guitar (demonstrating the unrivaled interplay present in so many of Wolf’s bands) with Johnny Jones on Piano, Sam Lay on drums and the colossal Willie Dixon on bass. Does it get any better than that?

The players on “You’ll Be Mine” sound as if they’re all skidding on two wheels, destined to slam into one another in a multi-car pile-up, yet somehow they stay the course, setting the stage for the menace that was Wolf, growling over and over “You’ll be mi-i-i-ine, you’ll be mi-i-i-ine…”

Yeah, and after all that vitality and sexual tension, it’s time to take it down a notch with another fine beer from Superfreunde. (For more on this hip German brewer, see Listening Party #5.)

The pale ale they call Hang Loose says hello with a sweet, hay-like aroma and corresponding golden hue. There’s a scent of lemon there, too. Is that you, Ella?* The pour results in a clean, fluffy head with good retention. The beer feels dry at first, but its Graham cracker flavor wins out in time. It’s smooth and quenching and – yes – a nice, laid back glass to hang with at this private birthday celebration.

(*Ella is an Australian hop variety. I didn’t know that either until now.) 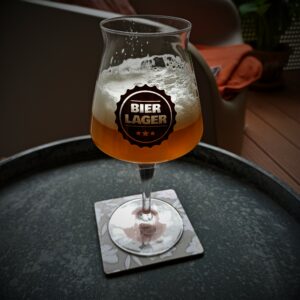 Meanwhile, Howlin’ Wolf’s greatest hits play on. I absotively love this music and could listen to it all night. “Smokestack Lightning.” “Back Door Man.” “Who’s Been Talkin’?” “Howlin’ For My Baby.” I mean, c’mon! But: Which of them is the right song to carry me over the threshold to a dreaded birthday?

But “Goin’ Down Slow” … who among us can’t relate to that one?

The opening line “I have had my fun, if I never get well no more,” penned by St. Louis Jimmy Oden, is like the ultimate bluesman badge of honor. A play hard, die young stare down with death. The guy in the song obviously doesn’t have much time left. I just happen to be turning a year older. But if you think about it: Isn’t aging synonymous with going down slow? Year after year, inexorably creeping closer to that date with the Grim Reaper?

Uh oh. I’m getting morbid again. Enough of that. I’ll re-focus now on all the fun I have had – you know, the kind of good times kings and queens don’t know about – as the beer goes down slow and I sink into this classic performance. That’s Willie Dixon narrating, in case you ever wondered.