I like to jump around musically at the Listening Party, both within and without the blues genre. Now that we’ve reached another round number on the beer and blues hit parade, I intend to do some more jumping.

You see, I’ve never quite understood why blues fans – or diehard fans of any one style of music – are so intent upon listening only to that genre, or why they choose to define it so narrowly. It’s like loving basketball but hating all other sports, like reading police procedurals but no other kind of book. Doesn’t seem quite right, does it?

I’m devoting today’s Listening Party to Jimmy Scott and his album Lost and Found. It’s a reach, I guess, outside the blues into the realm of jazz. Scott – to my mind the greatest balladeer ever – is generally considered a jazz singer. But honestly, I can’t think of anyone bluesier.

Beer is also matter of taste. There are purists who stick to one type of beer or even a single brand throughout their lives. Others try different styles and flavors from all over the world, discovering loves, likes and dislikes along the way.

That’s what I’m doing here at Listening Party. Exploring the world of beer while presenting my favorite music. Today, while getting lost in the wonder and heartbreak of Jimmy Scott, we’ll partake of Chimay Bleue, a strong Trappist ale from Belgium. I honestly don’t know what to expect. 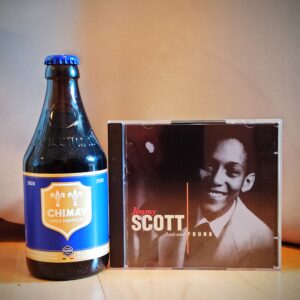 First of all, Jimmy Scott aka “Little” Jimmy Scott isn’t something you’d normally put on at a party. Lost and Found certainly isn’t. Unless that party is a gathering of the local chapter of the Lonely Hearts Club.

Scott could sing better slower than anyone I know of. His music – most of it at least – is intended for quiet contemplation, for remembering lost love, for crying your eyes out.

Here’s a first chilling example from Lost and Found.

Goosebumps? I sure got ’em.

If you’re meeting Jimmy Scott for the first time and are convinced what you’re hearing is a woman singing, then you are not alone. Scott – born in Cleveland, Ohio in 1925 – suffered from a condition called Kallmann Syndrome that prevents individuals from completing puberty. He never grew to more than five feet tall and his voice remained that of a prepubescent male. In the language of today’s LGBTQIA+ culture, Scott would presumably be considered “intersex.”

I have Lou Reed to thank for turning me onto Jimmy. Scott memorably backs up the chorus of “Power and Glory,” a cut off Reed’s outstanding 1992 album Magic and Loss. There, he was billed as the Legendary Little Jimmy Scott. So I never had to wonder if it was a man or woman singing. That voice was one of a kind either way.

Here’s another cut off Lost and Found. The 1993 Rhino Records release paired five tracks from a 1969 session (originally issued on The Source) with five previously unreleased recordings from October 1972.

The albums and beers I feature here don’t always “connect,” though I try to pair two entities that are somehow akin to one another. The name Chimay Bleue – soft, enigmatic, indicative of color – and the label – dignified, regal even, in a blue and gold recalling the uniforms of the UCLA Bruins – did lead me to Jimmy Scott, though. Even the raised lettering on the bottle, bearing the name of Scourmont Abbey, the Trappist monastery where Chimay beers are brewed, suggests class. That’s how I see Jimmy.

The sell-by date of 2024 threw me at first. It’s attributable to the re-fermentation that takes place in the bottle. Theoretically, you could let Chimay Bleue age for a while; it supposedly reaches its peak after 2-3 years. Perhaps I’ll try that with one of Chimay’s luxury editions, like the Grande Resérve (a 0.75 liter bottle) or Magnum (1.5 liters).

As for my modest 330 ml bottle … I poured at a temperature of roughly 10° C (50° F) and let the beer breathe in the glass for a bit, as suggested. By now, you can see where this is going. Sampling Chimay Bleue is a bit like drinking a fine wine. It’s said that the more it ages, the more its sweetness resembles that of a port. I was struck first by the reddish copper color and malty, earthy scent. In terms of flavor, there’s a roasted quality to it and a fruitiness that recalls black cherry. Above all, it’s got lots of body. 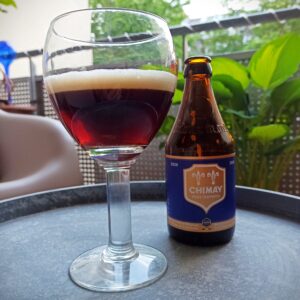 At 9% ABV, this is a glass to be enjoyed slowly. Savored. Definitely unsuitable for a night of guzzling. It’s more mellow jazz bar than ear-splitting bluesrock show.

With that in mind, let’s finish things up with another gut-wrenchingly beautiful performance by Scott – a recording I include on my short list of greatest vocal performances ever. Sinatra was first to record “Day By Day” in 1945; over the years, it’s been performed by Doris Day, Ella Fitzgerald, Johnny Mathis and dozens of others. I can’t imagine any of those versions being as deep and dramatic as Scott’s.

Is it blues? Jazz? Pop? I think Atlantic Records producer Joel Dorn said it best in the liner notes to Lost and Found: Jimmy Scott is a category unto himself.