Deep from within a swirling pool of childhood memories, I hear it bubbling up into consciousness: A small intermingling of children’s voices, singing Christmas time is here, happiness and cheer …

For most of us, the run-up to the holiday doesn’t feel much like A Charlie Brown Christmas. It’s a hectic dash to finish off projects and order a few more Christmas presents, fearing our loved ones may have got us more than we got them.

With that in mind, I’ll not take up much of your time with this final Listening Party of 2021. The plan’s simple: I’ll spin a few of my favorite holiday-themed blues 45s on the official Who Is Blues cheapo phonograph, which you’ll see in the clips to follow. Quick hits on some great tunes you never hear on the radio.

And I’ll crack open a cheerfully designed bottle of seasonal Festbier from the Bavarian town of Riedenburg.

We’ve all heard holiday classics by Bing Crosby, Gene Autry, Eartha Kitt and Nat King Cole a million times. Let’s give these bluesmen their due. 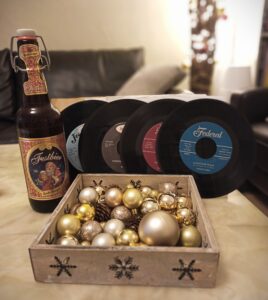 We’ll start with Lowell Fulson. A giant of West Coast Blues in the 1940s and 50s, he’s probably best remembered for “Reconsider Baby,” one of a number of top ten hits. His contribution to the Christmas canon, “Lonesome Christmas (Part 1 & 2),” dates from 1950, when it was first released as a 10-inch shellac on the Swing Time label. The song credit goes to pianist Lloyd Glenn, who played on the session alongside saxophonist Earl Brown, whose alto features prominently. The single peaked at #7 on the Billboard R&B chart that year.

My 45rpm disc is a re-release on Hollywood Records dating to 1955. I’ve chosen “Lonesome Christmas Part 2,” where Fulson’s guitar speaks more loudly than on Part 1.

Freddy King’s “Christmas Tears” may be my favorite forgotten holiday gem. The man who gave us “Hideaway” and “Palace of the King” probably saw a Christmas-themed single as a chance for an easy hit. But he sounds convincingly blue as he sings “I hear sleigh bells ringing, but I haven’t heard a word from you in years…” That line – the repeated “A” in the classic “AAB” scheme of this twelve-bar blues – may be nothing more than a songwriter finding a simple way of rhyming the title. But there’s no denying King’s inspired performance, both on vocal and guitar.

The tune is apparently a creation of Mississippi-born bandleader Alphonso “Sonny” Thompson and someone named Robert Charles Wilson. King’s version of “Christmas Tears” (b/w “I Hear Jingle Bells”) appeared on Federal Records in 1961.

Smooth-as-silk pianist and singer Charles Brown (not to be confused with the Peanuts charatcter mentioned above) is the blues performer most closely associated with Christmas, as his 1947 recording of “Merry Christmas, Baby” (with Johnny Moore’s Three Blazers) became a standard. He went on to record many more Yuletide-related songs during his long career, including “Please Come Home For Christmas,” a huge seasonal hit in 1960.

Ten years later, Shreveport, Louisiana-based Jewel Records put out a single with Brown singing new versions of both those Christmas classics. According to Brown, he’s the one who came up with the song “Merry Christmas, Baby,” though the credit went instead to his bandmate Moore and songwriter acquaintance Lou Baxter. He was more fortunate in the case of “Please Come Home For Christmas,” earning a co-write credit. This was surely a boon later, when The Eagles, Bon Jovi, Kelly Clarkson and Willie Nelson all enjoyed moderate success with their cover versions.

Brown’s delivery on the 1970 re-make is typically laid back and laconic.

As I prepare to unleash Riedenburger’s Festbier from its half-liter swing-top bottle, an Archie Bunker line springs to mind, spoken as he holds an ugly yellow can in his right hand – the only brand of beer TV’s most lovable bigot ever drank. “God don’t have nothin’ against takin’ a drink to celebrate his son’s birthday.”

The Christmas Festbier produced by Riedenburger Brauhaus is nothing if not natural. It’s unfiltered, unpasteurized and made with organic ingredients. I like that. It presents in a rich caramel color topped by a beautiful creamy head. The nose is nutty, with dark spicy accents. Not overly bitter nor sweet, malty, somewhat chocolaty. Full bodied. And it makes Santa happy! Or is that the Weihnachtsmann seen grinning on the bottle’s kitschy label? St. Nick? Father Christmas? 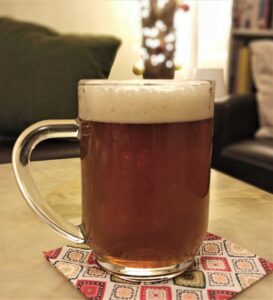 As I quaff the final drops (now that went fast) and before we come to our final song, a disclaimer: Christmas feels different from when I was growing up. Why wouldn’t it? The older I get, the more cynical about it I become, recognizing that the holiday is a mash-up of traditions with little rhyme or reason. As such, I don’t force myself to get excited or sentimental. You’ll never hear me utter the phrase, “It doesn’t feel like Christmas” in the days and weeks before the holiday. What is Christmas supposed to feel like? Do any of us really know?

The one thing I’m certain of is that good blues and good beer help to make the season bright, more so than “a turkey and some mistletoe” ever could.

On that note, let’s finish with a wonderful upbeat Christmas tune from B.B. King – minus the song facts, as I promised I’d be brief.

“Christmas Celebration” dates from 1962 and was reissued many times in subsequent years, presumably to drum up some seasonal business. It’s B.B. and Lucille in all their early sixties, Kent Records glory.

Dear reader, thank you for your interest in the Who Is Blues Listening Party. I wish you peace, prosperity and health until we meet again in 2022.