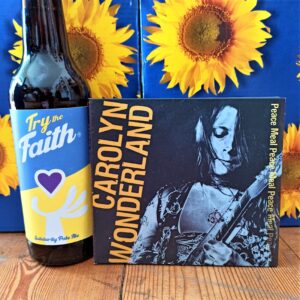 Let’s let the three-time Austin Music Award winner get things rolling by asking the timeless musical question: “What Good Can Drinkin’ Do.”

In the spirit of community I’m going to forego my usual private tasting and share how my neighbors reacted to grei.beer’s Solidarity Pale Ale.

You see, as soon as I heard about the Brew For Ukraine movement, I was all in. I ordered a twelve-pack from grei.beer’s online shop. It arrived a few days later. Rather than down all that delicious beer myself, I posted a message in my apartment house’s WhatsApp group suggesting we meet for a drink the following Sunday in our shared back garden. The afternoon was chillier than expected, still, warm vibes prevailed.

Serving a pale ale at one of our gatherings was risky. As I’ve mentioned before, the standard offering in the city of Cologne is Kölsch. Pretty much everyone drinks this light, crisp, refreshing native beer. At a barbecue, that would be straight from the bottle. Proof that I have become a beer nerd? I ordered a set of twelve beer glasses for the occasion, because I couldn’t imagine drinking a pale ale from the bottle. Also, I wanted them to enjoy it.

So I set up a row of glasses, cracked the first bottle and poured. The aromas that hit me while pouring … oh yeah. I knew right there I was going to like this one.

I like the way grei.beer, on its website, tells you exactly where it sources its ingredients. The hops come from a grower in Bavaria’s renowned Hallertau region. Special malts come from a pair of British suppliers, Crisp and Fawcetts. The beers grei produces are unfiltered and unpasteurized. And if the brewery’s pale ale is any measure, I am sold. It’s bold and fruity and beautiful to behold.

But what did my neighbors think?

One young man, possibly the youngest in our group, already knew the best addresses for craft beer in the city center, so I wasn’t worried about him. “You’re gonna like this!” I told him. Many in our tight, bundled-up circle made no explicit comment, but didn’t hesitate to ask for more, which I interpret as a thumbs up. Most interesting were the widely varying reactions of a couple who live one floor above me. The woman, a diehard Kölsch drinker, took a sip of the pale ale and set the glass back down. “Zu herb,” she said, grimacing, meaning it was too bitter or tangy for her. Meanwhile, a few feet away, her husband’s face lit up as if he’d never tasted a beer quite as delicious as this one.

Obviously, I’m siding with him. 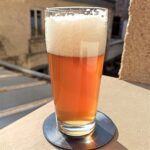 The names of the Brew For Ukraine beers are a riot.

Some are straightforward, like Blue & Yellow (Moonshot Brewing), We Stand With Ukraine (Green Monster Brewery), IPA For Peace (Common Space Brewing) or Make Beer Not War (Rightersbier). Hops Will Triumph Over Evil (Jet-A Brewing) has a nice ring to it. Putin Is A Pile Of Manure (The Brewery At Maple Brew Farm) is probably the most polite reference to Russia’s head of state. Putin Is A Dick (IVO Brewery Ltd) gets right to the point. The End Of The Innocence (Stannary Brewing Company) takes a more philosophical approach.

Whichever one you choose – try a great beer and raise money for a good cause at the same time. What have you got to lose? 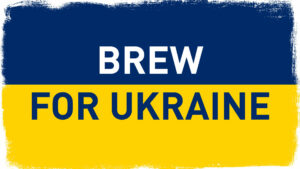 Or check out this list of participating beers and breweries compiled by Untappd.

I’m raising a glass right now as we close out this Listening Party with the wonderful “Golden Stairs.” Go down shining.