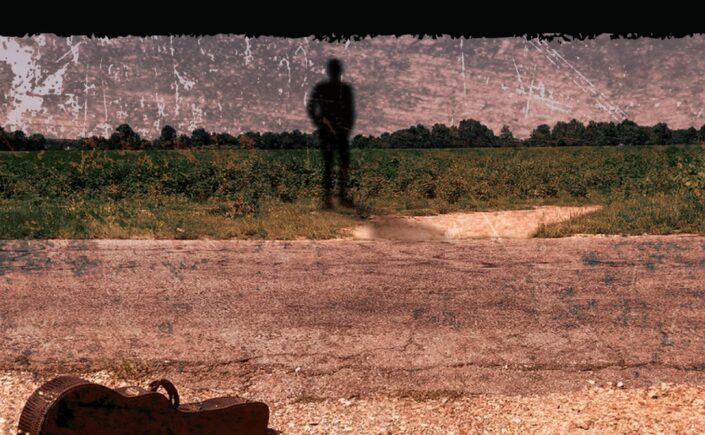 Book Review: Murder At The Crossroads

A blues mystery by Debra B. Schiff & Doug MacLeod

(Full disclosure: The reviewer is the author of Who Is Blues Vol. 1: Doug MacLeod – The Authorized Compact Biography.)

Let’s start with this: You needn’t be a devotee of blues musician Doug MacLeod or a blues fan at all to appreciate Murder At The Crossroads, a new novel MacLeod wrote in collaboration with author Debra B. Schiff. The book – billed on its cover as “a blues mystery” – stands on its own merits as a plainly told tale of a middle-aged man struggling with the guilt he has felt ever since witnessing a racially motivated killing as a young man in Mississippi. It’s also an unflinching portrayal of racism as it has existed at two different points in American history.

After introducing the story’s down-but-not-out central figure, guitarist Eddie Baker, then depicting the brutal, early 1960s hate crime that drives the action, the plot moves briskly through a number of locales; in scenes set in 1990s Los Angeles, Las Vegas and Mississippi, with brief detours to Memphis and Chicago, we meet archetypes such as the devout Southern Baptist, the menacing casino boss, the clandestine white supremacist, the single mom and her abandoned son. First and foremost, there is the quintessential bluesman in the form of “Sweet” Eddie Baker and, to a slightly lesser degree, his Mississippi cronies.

With MacLeod on board as co-author, there’s no questioning the novel’s blues cred. The celebrated musician’s path in life has led him from backwoods Virginia – where he learned essential blues lessons at the feet of a grizzled veteran – to working the clubs of Los Angeles from the 1970s onward, subsequently breaking out as an internationally touring artist and recently settling down in the self-proclaimed home of the blues, Memphis, Tennessee.

Elements of MacLeod’s own story crop up in the book again and again. Sometimes it’s in tongue-in-cheek fashion, as when MacLeod himself appears in the narrative. In one scene, the protagonist Baker visits the home of Rod and Honey Piazza (real-life friends of MacLeod’s); later, he and his Mississippi pals witness a cathartic nightclub performance by Chicago legend Son Seals. One recognizes MacLeod’s voice, his vernacular, his humor and his musical philosophy throughout. Anyone who knows the blues or has read MacLeod’s biography is sure to get a kick out of these touchpoints, where fact and fiction intersect.

There is one key difference between Doug MacLeod and the character of Eddie Baker, however: The latter is a person of color while MacLeod is generally regarded as white. (Note: In his biography, he questions his ancestry and doesn’t rule out the possibility that there’s a little bit of “black blood” in him.)

With that in mind, Murder At The Crossroads works both as a story about atonement and coming to terms with one’s past and as an exploration of racism in America. Most of the action is set in 1992, the same year a group of Los Angeles police officers were acquitted of using excessive force against arrestee Rodney King despite the beating being captured on videotape – a verdict that set off six days of deadly rioting in the city. That’s thirty years ago.

Most of us would like to believe we’ve made progress since then. But in the light of more recent, similar incidents which seem to happen somewhere in the US every few weeks (the killing of George Floyd while in police custody being the most famous example), you have to wonder if the discrimination routinely faced by people of color has in fact gotten worse.

The spectre of institutionalized racism looms large in Murder At The Crossroads – particularly when the central figure returns to the smalltown Mississippi hometown he fled as a young man. There, he discovers that while conditions may have improved substantially since the 1960s, hate still bubbles beneath the surface.

As a writer, I’m an extremely critical reader. I couldn’t tell you the number of novels I’ve picked up during the past year and abandoned again after ten, 20 or 50 pages simply because I didn’t care about the characters or their fate. By contrast, I did care about Eddie Baker and most of Murder At The Crossroads‘ supporting cast. Thus, I polished off the 167-page novel in just a couple of sittings. It’s a page-turner, filled with familiar but likeable, well-drawn personalities. The plot is easy to follow, with just enough twists and turns to keep the reader engaged. Best of all, the food for thought it delivers along the way makes it more than just a breezy entertainment for diehard blues fans.