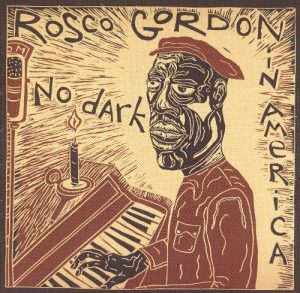 Rosco Gordon – “No Dark In America”

No Dark In America, the final album and ultimate musical statement of Rosco Gordon’s career, emerged posthumously in 2004, two years after his passing in the summer of 2002. The title song and centerpiece of the record is an unusually upbeat tune written in the wake of the terrorist attacks that brought down the World Trade Center in New York. The tune celebrates the human spirit to an infectious, ska-inflected rhythm, exuding joy and a firm belief that any calamity, no matter how great, can be overcome.

Co-producer Chris King, who contributed to the lyrics, witnessed the R&B pianist’s pride at having composed “No Dark In America.”

“He played it for everyone who would listen,” wrote King in the album’s liner notes. “He had found a song for people to enjoy (…) which might lift them from crushing sorrow.”

Lij Shaw, King’s partner and lead producer and engineer on the project, recalls how excited Gordon was about the song. “Rosco called me one day and said ‘I’m coming to Nashville. I’ve got a new song, and I need you to put a band together!’ Normally that should not be too much of a challenge except for the fact that Rosco would be arriving in one week … so I had to act fast!”

At the time, Gordon – a Memphis native and one of the first artists recorded by Sam Phillips of Sun Records – had settled into a life of relative obscurity in Queens, New York. Memphis, Tennessee, a 2000 release that earned him a Comeback Artist of the Year nomination at the Handy Awards, had sparked renewed interest in his music, yet even the neighbors in Queens had little idea of his accomplishments or of what was going on inside his modest apartment, using mobile equipment set up by Shaw and King.

“For most of the record Chris King and I had been adding overdubs to solo performances we previously recorded of Rosco singing and playing in his apartment.  This was a chance to get him into the studio with a real band and see what we could do. I did what any young producer would do and called all the best musicians I knew in Nashville to accompany Rosco at my studio.”

Among them were drummer Ken Coomer (Wilco), bassist Warren Pash (who wrote “Private Eyes” for Hall and Oates), guitarist Joe Pisapia (Guster, k.d. lang) and saxophone player Jeff Coffin, who has worked with Dave Matthews and Béla Fleck. “We all felt honored to be working with the legend from Memphis who had helped define rock and roll and jump blues in the 50s.” 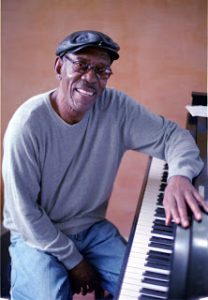 After cutting the track in just a couple of takes, Gordon sat down with his young studio band to share stories about life, love and making music. “I can’t divulge the things he said to us in confidence,” says Shaw, “but I can confirm that this nearly 70-year-old rock star made us feel like timid altar boys compared to his adventurous lifestyle!”

Despite Gordon’s known penchant for novelty tunes and the irresistibly buoyant feel of “No Dark In America,” his final recording was no laughing matter for the veteran musician.

“Rosco (…) was really shaken up by the terrorist attack on 9/11 and felt that, as a country, we needed a song of encouragement to find our strength. So he wrote “No Dark in America” as a way of finding the light from within the national sense of hopelessness after watching the towers fall in Manhattan.”

Adds Shaw: “He just wanted to bring everyone together, whether young or old, white or black, hopeless or hopeful.”

(Big thanks to Lij Shaw for his contributions. For more on Lij and his entertaining and informative podcast Recording Studio Rockstars, visit www.thetoyboxstudio.com or www.recordingstudiorockstars.com)

Take it away, Rosco…