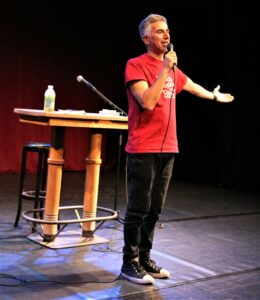 Glad you asked! New York-born Vincent Abbate has been a respected voice on the international music scene for roughly a quarter of a century. He’s contributed interviews, columns and reviews to leading print magazines including Blues Revue and Blues Music Magazine (US), The Blues (UK), bluesnews and ROCKS (DE). His music-related fiction and non-fiction has appeared online at Unlikely Stories, BluesWax, 3AM Magazine and Bandblogs. He also co-hosts the monthly live blues talk show Talkin’ Blues in his adopted hometown of Cologne, Germany.

“Some writers like to watch from the corner, scribbling into a notepad. But detached observation is not my thing! I can usually be found – like any other fan – down in the trenches in search of musical nirvana.”