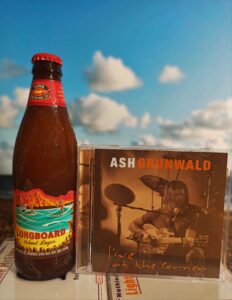 The “corner” mentioned in the title of Live at the Corner is the Corner Hotel in Melbourne. Grunwald set up there with a couple of guitars on July 17th 2004, hoping sound engineer Dave Davis could capture, in Grunwald’s words, “… that feeling when the audience spurs you on so you give a little more, which spurs them on so they give a little more, and after a while the room is going crazy and we’re all in the zone together.”

We all know what he’s talking about. Live at the Corner transmits that euphoria better than just about any record I’ve heard.

Effin’ A right! Grunwald plays “Hey Baby” with remarkable speed and precision. But it’s not some technical display designed to show people how awesome he is. He’s giving his all to get the audience pumped. To light a fire and to have it burn ever higher. Close your eyes and you’re inside in a steamy, sweaty club where inhibitions and borders are vanishing by the minute. Collectively, we are raising our vibration.

Ash Grunwald also plays the classics. Here’s his performance of “Smokestack Lightning” from the same show.

That’s a very good version of a timeless song that almost shouldn’t be touched. Grunwald puts a whole lot of thump into it and shows off a healthy set of lungs as he hollers and moans in the spirit of the great Chester A. Burnett.

Let’s do one more, “Just Be Yourself,” after which you are going to need that beer.

“Take your inhibitions, throw ’em in the corner, baby, we won’t be needing that stuff ’till the early morning. Just be yourself. I don’t want nobody else …”

The song starts with a deep, slinky, drop-tuned riff as Grunwald sings those words to his object of desire. He continues building on a repeating bass figure, throwing in a few slashing chords, the rhythm gradually intensifying as things heat up. Then he breaks it down, savoring the moment, plays some fancy hammer-ons. This is a stepping stone to the moment – just after the three-minute mark – when he steps on the gas and does the whole breakdown thing again in accelerated tempo. At four minutes, the dancers/lovers are writhing in contorted ecstasy. The climax. The singer pauses. The air is filled with screams of approval. Now spent from his efforts, Grunwald returns to the original unhurried tempo until, after almost six minutes, the encounter slumps to a satisfied close.

I’m not a smoker and still feel like reaching for a cigarette.

Let’s light it up instead with Longboard Island Lager. It’s one of Kona’s flagship beers, boasting a list of gold, silver and bronze medals long as your right arm. The neat, retro-looking label salutes Waikiki Beach in Honolulu, where Olympian Duke Kahanamoku aka “The Big Kahuna” acquired the skills that made him the father of modern surfing.

I got a short-notice call to get my first jab in the middle of writing this blog post. While the experts don’t explicitly advise against drinking alcohol after getting the shot, I decided to refrain for a few  days so I could keep a close watch out for any ill effects. Thankfully, I wound up with nothing more than a bruise on my left arm. Let’s get back to the beer, shall we?

Funny thing is, since starting this post with a lot of bitching and moaning last week, the weather has taken a dramatic turn for the better. The sun is out, hardly a cloud in the sky and I am NOT freezing my kahunas off.

Kona’s Longboard Island Lager suits the friendlier conditions. It’s a crystal clear, sweet-scented, lightly fruity thirst quencher with a healthy dose of carbonation. Finely balanced, it drinks smooth with just the right amount of bite in its back pocket. 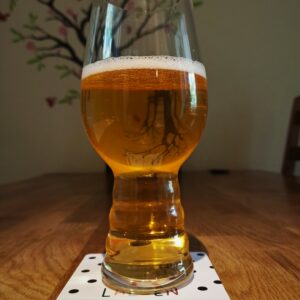 I’d like to close this one out not with another cut from Live at the Corner, but with the official video for “Walking,” which appeared on Grunwald’s Gargantua album and prominently in the Hollywood movie Limitless. Grunwald and his rhythm section appear in black and white while all around them, birds fly, whales leap from the waves and stars and stripes and splashes of color descend from the heavens. This party may have got started in pre-vaccine drabness, but now I’m seeing technicolor.