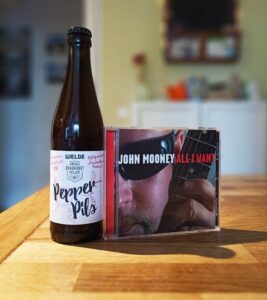 Pepper Pils. If the name makes you think of a porcine cartoon character with a British accent who loves splashing around in muddy puddles, you’re not the only one. And you’re almost certainly a parent. Should we talk about parenthood? Well for starters, being a parent of two children, eight and twelve, is one reason I drink (and enjoy) beer so much.

Pepper Pils is a so-called “collab beer” – the product of two or more breweries working together to create something new. In this case, Baden’s 260-year-old Welde brewery teamed up with the more cutting-edge Himburgs Braukunstkeller, based in Munich.

Let’s have a sip. 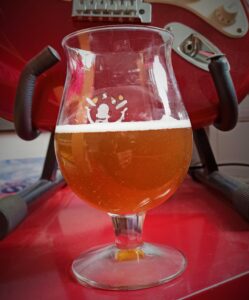 Hmm. Different. Very different. Reading of the pink pepper used to liven up this unfiltered, amber-colored Pilsener, I expected more bite, more bitterness. When in fact, both the aroma and flavor, at least initially, are more floral in nature. Perfumey even. I’ll have spend a bit more time with it to make a fair assessment. In the meantime, let’s listen to a first cut off All I Want, the sneakily brilliant “Tell Me Who.”

“Tell me Who” takes me back to that late afternoon hang in Bavaria, or rather to the performance that followed it that evening. There, inside a friendly, half-timbered, hardwood-floored pub – more so than on the bigger stages I’d seen him play in New Orleans – I understood the full impact of what Mooney does and got to bask in his brilliance. Unlike the recording we just heard, it was just him and his guitar that night, a 1951 National Archtop in Open A tuning. But that was plenty enough to make the walls rumble.

Describing sound in words is always a challenge and in Mooney’s case it’s even harder than usual. So I’m going to cop something Robert Cray once told me. In Cray’s eyes, the amount of notes a guitarist plays doesn’t matter as much as the way the individual notes sound. He was talking about B.B. King at the time, but the idea applies to Mooney’s playing as well:

“I found that if you hang on a note, it’s like hey – you start considering the sound of that note. Whereas if you play a flurry of notes, then you don’t really have a tone that sits there, that rings out, that pierces one’s soul.”

That’s the best description I can come up with. The notes Mooney coaxes out of his guitar  – “Tell Me Who” is a prime example – regularly pierce my soul.

The song listed as “Son’s Blues” on All I Want contains familiar verses from the blues lexicon and shows his obvious debt to the master Son House. Here, it’s just him, his guitar and stomping foot.

Well … I guess I could say Pepper Pils has grown on me ever so slightly over the course of my single glass. The peppery flavor did come through eventually – though I’m still not sure it’s something I want to taste in my beer.

We’re going to close it out today with “She Ain’t No Good.” It’s a great example of how Mooney sets those Delta licks to a New Orleans second line beat. Pitching in here are Jeff Sarli on bass, Bernard “Bunche” Johnson on drums and Alfred “Uganda” Roberts on congas and percussion.

By the way: My chat with John Mooney from 2003 is included in Who Is Blues Vol. 2: The Interviews, a collection I’ll be publishing in paperback later this year. There, he shares memories of Son House, talks about the making of All I Want and about how music is, for him, a transcendental experience.

I’m not sure I’ve done either the artist or the beverage justice. There will be days like this, mama said. (Mama said, mama said.) I guess the only solution is to turn up the music until it drowns out the doubts. Enjoy. Bye y’all.