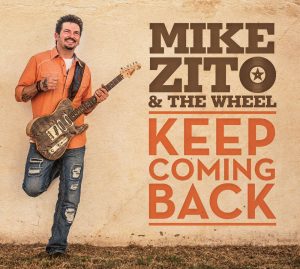 “We both write songs about addiction. They’re either about the dark side of addiction, about doin’ drugs or whatever. Or you write these really hopeful tunes,” says Zito of his collaboration with the Louisiana-based musician. “As for ‘I Was Drunk’: I had already written the song, more or less, and I wanted Anders to contribute some verse lyrics. We had already recorded the song ‘One Step at a Time’ together – and again, I was like, we did that song and it’s really hopeful, about how everything gets better. But there were a lot of other times where you would say it didn’t get better. It was bad. People got hurt. A really sad state of affairs. That’s what ‘I Was Drunk’ is about.”

Musically, the song is rooted in country rather than blues.

“I grew up with as much country as blues in St. Louis,” recalls Zito, who has since settled near Houston. “In St. Louis, you would go to a country bar to hear a country band. Or go to a blues bar to hear a blues band. Where I live now in Texas, there’s no country bar or blues bar. There are just these big roadhouses where the bands play all that shit. You’ll see country bands that play Stevie Ray Vaughan. Or you’ll see a blues band that plays Willie Nelson. The lines are totally blurred. That’s where I feel I belong.”

In the case of “I Was Drunk,” he just picked up his guitar and started strumming. “It’s like an old Merle Haggard song,” he says. “I don’t even think about it anymore, whether a song is bluesy or country. It seems to go hand in hand.”

From Zito’s outstanding 2015 release Keep Coming Back, here is “I Was Drunk.”