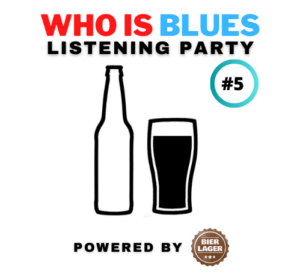 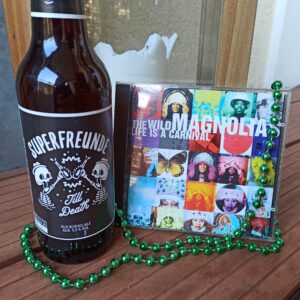 I probably saw more live music and more good music those ten days that at any other point in my life. I can’t speak about post-Katrina New Orleans because I haven’t been there, but pre-Katrina New Orleans more than lived up to its reputation. Among the highlights of that first visit (which inspired me to return the next year): A triple bill with Tab Benoit, Kenny Neal and John Mooney at Tipitina’s; Rebirth Brass Band at the original Mid-City Lanes Rock’n’Bowl; afternoon cocktails at Jimmy Buffet’s Margaritaville where Coco Robicheaux played for tips, the frequent in-stores at Louisiana Music Factory, George Thorogood at the House of Blues … and that’s not even counting the actual festival at the Fair Grounds, which went from 11 am to 7 pm every day.

Right in the middle of that swirl of rhythmic goodness were the Wild Magnolias. Of the Mardi Gras Indian bands we saw on the Congo Square stage at the Fair Grounds, they’re the one that stood out because of the way they take that local tradition to the next level. In looking for a way to describe Life is a Carnival, which came out in 1999, I came across a Robert Christgau quote that perfectly sums it up. He called the Magnolias’ album “the most boisterous recorded party I know.” Only Christgau happened to be writing about their 1974 debut.

“Party” may not be the album’s best cut, but if you’re looking to ignite a fire, you can’t do much better. And that’s how I remember the Wild Magnolias – at JazzFest, at the Funky Butt club, at the festival in Belgium where I saw them years later. They were a party – dressed in the most outlandish Mardi Gras Indian costumes, all multi-colored feathers and beads, ten-foot headdresses and 20-foot wing spans. And they sure brought the funk.

Life is a Carnival isn’t just a Magnolias album, though. It’s sometimes knocked for being a commercialized, big-budget version of Louisiana folklore, but more than two decades after its release, it stands as a monument to the musical spirit of turn-of-the-millennium New Orleans, a musical summit where local heroes like Cyril Neville, Allen Toussaint, Marva Wright, Davell Crawford, Michael Ward, Russell Batiste, Monk Boudreaux and so many more join in. Big Chief Bo Dollis (RIP) – that sandpaper voice you hear on “Party” – is the ringmaster on all but a few cuts.

Right now, I want to lose myself in visions of those warm spring afternoons on the Fair Grounds, where people of all shades gathered to dance and smile and chill. Days on which it simply felt good to be alive. I’ll be back on the other side of “All On A Mardi Gras Day” with some words about today’s beer of choice.

Having taken a moment to read up on the people behind Hamburg-based Superfreunde beers, I know their “Till Death” Old School Ale, a new take on traditional Altbier (literally “old beer”) was a good choice. With ties to the indie rock world and some pretty rad streetwear, Superfreunde is a consciously hip brand. But what I like most is their focus on friendship. Superfreunde translates as “super friends.” A motto on one of their t-shirts – “If we go down, we go down together” – celebrates the company philosophy.

So as I pour this copper-colored, dry-hopped ale into my tasting glass, I find myself thinking of a very good friend. A lanky, long-haired dude I’ve not seen for a while. Indeed, the person I shared that first trip to New Orleans with.

One of many things I could tell you about him … on our drive through Mississippi, the two of us took turns behind the wheel. Share, share, that’s fair. But once we were back in New Orleans I didn’t feel like holding back or being in any way responsible. Guess who volunteered to do all the driving? He transported us back and forth to the Fair Grounds every day and got us home safely from Tipitina’s, the Rock’n’Bowl, the Circle Bar and wherever else we crawled at night. Did he complain about having to pace himself? Nope. Did he make me feel guilty? Nope.

Even prior to corona, he’d been keeping to himself, shunning live concerts and leaving me and our gang of music freaks wondering what was going on in his world. So I miss this guy. Here’s to you, super friend. 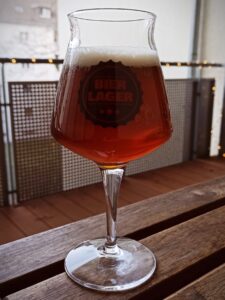 There’s a lot to recommend Life Is A Carnival. If you’re looking to generate some Mardi Gras feeling over this oddly quiet weekend, turn it up. It’s not all fun and games, it’s also a bit of an African-American history lesson. And don’t sleep on the back half of the album, which feels slightly less commercial and includes Dr. John’s wonderful “Black Hawk” as well an electronified updating of the Magnolia’s reefer-filled “Peace Pipe.” See you next week.