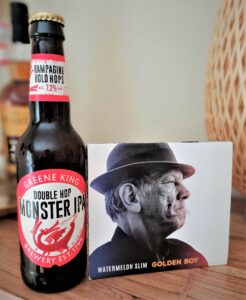 Considering Golden Boy from today’s perspective, i.e. in March of 2022, it’s fair to say current events shed a somewhat different light on the record while underscoring the timeless quality of its messages.

When I met Watermelon Slim around the time of the album’s release (read the full interview here), the global issues on his mind included climate change and the David-versus-Goliath showdown that had recently taken place at the Standing Rock Sioux Reservation in North Dakota. Slim struck me as a man who had been through a lot in his roughly 70 years on the earth and one who would not go down without a fight. A man with deeply held values who would always stand on the side of justice in any confrontation. His feisty spirit runs through each of the ten songs on Golden Boy, which was recorded with a talented cast of indigenous musicians in Winnipeg, Canada.

Compassion for the less fortunate is part of the package. Slim expresses it with elegance on “Winners Of Us All” and with a barely controlled fury on the gritty “Mean Streets.”

His “Wolf Cry” is a shout of defiance. A rallying call. Slim clearly believes a bluesman can make a difference. “The blues is communion,” he sings. “It will feed your soul. If freedom means anything more than a footnote in human existence, come and share this bowl.”

Where else in the blues do you find lyrics like that?

“Dark Genius” would seem to be a paean to martyrdom. With a first verse devoted to JFK and a second to Anwar Sadat, the songwriter shows his sympathy for a pair of assassinated world leaders who made too many enemies. In the startling final verse, he sees himself in a similar light – as a “dark genius” likely to end up the same way but determined to “take a heavy toll” before he dies.

Not exactly “One Bourbon, One Scotch, One Beer.”

Speaking of which, a bit of beer history: The British big player known today as Greene King is descendant from the Greene’s Brewery founded in 1799 by Benjamin Greene. Based in the East Anglian county of Suffolk, the company later merged with a rival operation run by a gentleman named Frederick King. Today, the company brews the UK’s top-selling cask ale, an India Pale Ale simply named Greene King IPA.

The label on my bottle of Double Hop Monster IPA is simpler and bolder than the one shown on the brewer’s website. It’s striking and has me up for fun. The hop bill is extensive, in line with the IPA’s moniker: Challenger, Pilgrim, First Gold, Target, Styrian, Cascade. 7.2 ABV, 65 IBU … let’s listen to “Dark Genius” and see what all that adds up to …

What it all adds up to is a lightly carbonated pale ale with a clear, deep amber hue. The thin head is gone in an instant, but the beer leaves plenty of lacing on the glass. (You chemists will have to explain that to me.) With an IPA, the first sniff can be decisive – the nose is a great detective – and this is most definitely the case with the Double Hop Monster. It’s hoppy for sure, but I’m missing the juicy, citrusy aromas that get me and my olfactory receptors excited. And the taste? Somewhere behind all the bitterness is a trace of grapefruit trying to get out. I’m not going to fall in love with this one. It’s exceedingly dry and somehow medicinal.

Then again, perhaps a pungent brew suits a tough cookie like Watermelon Slim. And it does deliver an agreeable buzz if nothing else. Put that together with this exceptional album and I am feeling good. 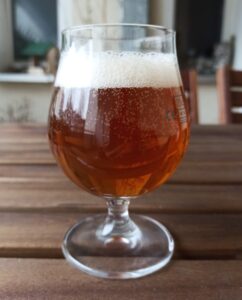 Full disclosure: In the course of writing this Listening Party, I’ve had one eye on the TV set. I’ve seen upsetting images from Ukraine. It’s hard to tune that out. Wars of course are nothing new. Our subject this week, William Homans aka Watermelon Slim, served in Vietnam and experienced some of the horror of combat. Later he became an active anti-war demonstrator and lifelong member of Vietnam Veterans Against the War. He includes the organization in his list of dedications in the liner notes.

The spirited “Pick Up My Guidon” opens Golden Boy and was written explicitly for his fellow vets.

Maybe I’ll be able to steer clear of politics altogether in the next Listening Party. Though there’s a movement going on right now called Brew For Ukraine that may keep us busy for a while. More on that next time. See you.

(Please consider donating to World Central Kitchen or one of the many other organizations helping to alleviate suffering in the Ukraine and other parts of the world.)