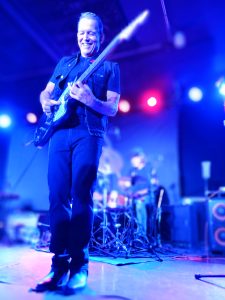 A Bluesman Came To Town

A bluesman came to town.

I’m surely not the first concert reviewer to use that title since the album of the same name – which Tommy Castro likens to a rock opera, only it’s blues – swept away the competition at this year’s Blues Music Awards ceremony in Memphis. Local fans had waited over three years for this particular visit by Castro and his band The Painkillers. And there was more than enough cause for celebration on both sides, as this Wednesday evening club show coincided with even more accolades from the US: Readers of Blues Blast Magazine had just dubbed The Painkillers Band of the Year.

The chance to see this band on a small stage in a half-full club is something I don’t take for granted. Castro isn’t the star in Germany that he is back home. This is his third appearance at the Yard Club in the past five years. And the audience hasn’t grown. In fact, we’re still living through some kind of weird post-pandemic trauma that is depressing ticket sales most everywhere you turn.

But as they say in the local dialect: Es et wie es et. It is as it is. So my attitude as Castro and his crew launched into “You Can’t Keep A Good Man Down” at around 8 p.m. was to simply enjoy the show. To soak it all in. Wasn’t too long ago we couldn’t do this kind of thing. How quickly we forget.

Stage left stood Randy McDonald, a stalwart on bass who has delivered the goods as Castro’s sideman for 30 years. Sporting a new furry chapeau, McDonald was as spot on as ever, also taking a turn on vocals with an enthusiastic version of Chuck Berry’s “Too Much Monkey Business.”

Huddled in the opposite corner was keyboarder Mike Emerson. In his traditional baseball cap, he cuts a low-key figure, instead making his statement on the keys. With solid organ fills and rollicking piano figures, Emerson always serves the song.

Bowen Brown, holding things down on drums, is a joy to watch. Powerful though he is, he doesn’t sit there whacking the drums like a jockey on the home stretch. With Brown, it all starts with wrist control. His work on the snare is exceptional.

Of course, the main man is Castro, the slicked-back Californian, who performs with the confidence of a dude who has been there and done that. No question, he is slowing down as he strides toward 70. A seven-week tour of Europe, Castro admitted from the stage, is hard work. If some of his movements during this 90-minute concert appeared a bit strained, well, I’m prepared to cut him some serious slack.

Ultimately, if a band gets you moving and screaming and punching the air, that’s what counts. In Cologne, Castro & The Painkillers delivered the exciting mix of blues, soul, funk and rock’n’roll they are known for. It’s funny: Right after one of the straight-up funk numbers, probably “She Wanted To Give It To Me,” a good friend turned and asked me in all sincerity what style it was. Moments later, when Castro asked the crowd if there were any true blues lovers in the house before counting off a classic slow blues, I heard the same friend utter, “Thank God.”

Apparently, some listeners would like to see Tommy Castro & The Painkillers stick to traditional blues.

To me, the band’s ability to shift from blues to funk to rock’n’roll and even a bayou groove like “Got A Lot” – and to do it all convincingly – is one of the best things about them. I talked to drummer Brown after the gig about this and he confessed that if all he was asked to do was play blues all night, he’d get bored. Much as I love it when Castro lays into a blues like “Serve Me Right To Suffer” – undoubtedly one of the evening’s highlights – I’m happy for the rocking moments as well, and the funk and everything else they do. Happy for every single moment. Happy that there are live shows to go to again! Happy that I could stand a few feet from the stage without bunking into anyone and bask in what the Bluesband of the Year were laying down.

Truly, it doesn’t get much better than that.