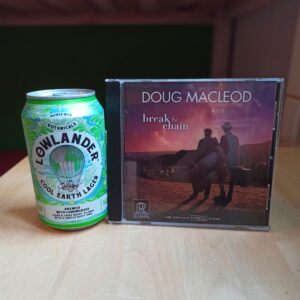 On the other hand, maybe small gestures do matter.

Which brings us to this week’s beer selection: Cool Earth Lager from the Dutch Lowlander brewery, previously featured in Listening Party #9. According to company info on their website, Lowlander is committed to becoming “nature positive” by 2030. That sounds much like the hollow claims coming out of the COP26 conference in Glasgow. But Lowlander has already taken some sensible steps that make raising a glass of their high-quality beer even more enjoyable. (More on that in a moment.)

What does any of this have to do with the blues or Doug MacLeod’s Break The Chain? Superficially, nothing. But look closely and there is something there. For example, the wry “Who’s Driving This Bus?” – MacLeod’s common man complaint about the “Wall Street moguls (who) brought this country to its knees” and the “liars, syndicators, popcorns and clowns” steering the world economy. Let’s have a listen.

Doug never hesitates to call out the folks in power.

As an independent brewer focusing on botanicals, some of the small measures Lowlander has already implemented in the area of recycling include reusing spruce needles from discarded Christmas trees and citrus peels from pubs and restaurants that would normally be thrown away. They support biodiversity by brewing with organic ingredients and are part of the “1% for the Planet” movement, donating one per cent of company sales to environmental causes.

The specific environmental benefit of drinking Cool Earth Lager is explained on the back of the very attractive can in which it is contained: For every unit sold, Lowlander adds one seagrass plant to the Netherlands’ Wadden Sea meadow. 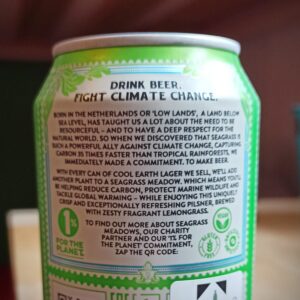 Why is that important? Seagrass is said to capture carbon 35% more efficiently than tropical rainforest. And, like the rainforest, seagrass meadows around the world have been depleted during the last century. Lowlander’s Cool Earth Impact Tracker provides up-to-the minute numbers on how many Cool Earth Lagers have been sold (137, 817 at this writing) and how much CO2 has been captured by the seagrass it has planted as a result.

Makes you want to run out and buy some, no? We’ll get to tasting it after the next song – the more light-hearted but not necessarily PC “This Road I’m Walking.”

The claim on the can calls Cool Earth Lager a “clean and crispy hoppy pilsener with a subtle zesty zing” and informs us of a taste-defining botanical ingredient: lemongrass. It’s a bright, translucent pour – very attractive – accompanied by a subtle aroma I can’t quite define. (Chocolate bar can’t be right, can it?) The mouthfeel is dry and prickly, only mildly lemony at first, becoming more citrusy as the beer edges toward room temperature. Above all, Cool Earth is easy and refreshing – no question, I can see myself spending a summer afternoon sitting near Amsterdam’s Prinsengracht, casually downing several of these and getting a nice buzz on in the name of CO2 reduction. 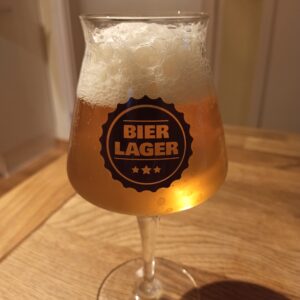 Let’s drink to Lowlander and to fighting climate change in the most pleasant of ways!

And thus, breaking the chain.

Ultimately, it’s the title of the BMA-award winning Break the Chain that makes it the ideal soundtrack to the climate change summit. Doug MacLeod wrote the title song about a different chain that needing breaking. One that traumatized him early on and made much of his adult life a struggle. He decided the buck would stop with him, that he would not inflict the same pain on his progeny and – together with his son Jesse – he wrote a song about it.

But the thought applies. Any successful attempt at reversing climate change entails a break with the past.