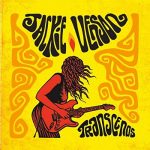 Has singer/songwriter/guitarist Jackie Venson been flying under the radar, or am I simply late to the party? The Austin native has been releasing material on both EP and LP since 2013 and is coming off a triumphant appearance at the Austin City Limits Festival this fall. Transcends is an EP of five one-word titles (“Flying,” “Fast,” “Mysterious,” “Fight” and “Transcends”) released in 2017. It’s an attention-grabber for sure. It opens with the blues-funk-pop hybrid “Flying,” where snappy rhythms underscore Venson’s luminous voice. “Fast” leans more toward indie-rock, like something Spin Doctors might have done in their heyday. Venson chooses softer tones on “Mysterious” and spreads some serious good vibes on “Fight” (“To change the world you first must change yourself”) and the title track (“Love transcends death, destruction, exploitation…”). Ultimately, the EP is a celebration of peace, love and good intentions; after it’s over, you’re certain Jackie Venson is someone you’d like to spend a few hours with. She has continued releasing singles in 2018 and is definitely worth checking out. – VA