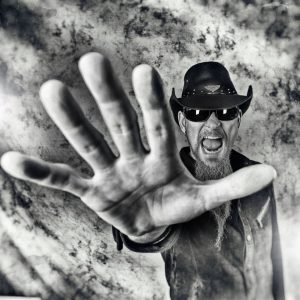 As talk resumes, Taft gives us some inside dope on the recording of Simple Life inside his basement studio, whose previous owner was a certain Mr. Frampton.

Who Is Blues: So tell me about your studio.

Dudley Taft: Well, I bought my house from Peter Frampton. He’d had this studio designed by Dave Mattingly, who has done design for top Nashville studios like Blackbird. A floating floor, no right angles … it’s frickin’ amazing. You walk in and it’s like: What the fuck is this doing in Ohio? Apparently, everyone who might have bought the house thought the same thing. He couldn’t sell it. For a year.

So we recorded Simple Life with a high-end Pro Tools rig, really good microphones, a separate control room, live room and everything. And there are little tie-ins with the mics all over the house. Up in the living room, there’s a little box in the wall. Frampton had a piano in there. So you could put headphones on and do overdubs up there. It’s an amazing studio. I’m very lucky.

WIB (to Kasey Williams): Kasey, you were part of the sessions. Which are your favorite songs on Simple Life?

Kasey Williams: I may be biased because I produced the first two videos off the album, but I like “Simple Life” a lot, and “Give Me A Song” is great. I also like “Shine.” If you listen to Dudley’s albums, they’ve all got their own thing, but this one, it almost feels like: Here’s what’s really going on. This is the story of my life right now. And it seems like it’s all good! I’m not saying that the stuff in the past was a downer. But it’s good to be able to say: Hey, things are good. Again, I might be biased, because I’m all over the record. But it’s my favorite album of his.

WIB (to Darby Todd): Darby, this is your first tour with the band. Looking at your resume, it would seem blues isn’t specifically your “thing.”

Darby Todd: I’ve made a career of playing music with everyone, from Gary Moore to Robben Ford to Dudley. Even Jethro Tull is rooted in blues if you look back far enough. (Author’s note: Darby Todd tours regularly with Jethro Tull guitarist Martin Barre.) So I’ve done a ton of blues. Is it the first music I listen to when I wake up in the morning? No. But I’m happy to play good music of any genre with anyone who’s good in that genre.

WIB (to Dudley Taft): As Kasey just said, most of the songs on Simple Life express an attitude of gratitude. But you do inject some anger on two political songs, “In Your Way” and “Don’t Let Them Get Away.”

Dudley Taft: Yeah. It’s funny. Not many people caught on to what it’s about. Because I don’t explicitly say it.

WIB: Well, one automatically assumes it’s about our current president and what’s going on in Washington.

Dudley Taft: It’s wading into difficult territory. Because you don’t want to alienate half of your audience. But not everybody understands what I mean. I don’t mention any names. And you know what? Twenty years from now, you might think it’s about somebody else.

WIB: Have you been including those songs in your live set?

Dudley Taft: The set list is a work in progress. We obviously have a bunch of new tunes, so we have to see where they’re going. It’s always interesting to see what works best for an audience.

WIB: Often it’s the songs they’re most familiar with, like covers, right?

Kasey Williams: The covers we do perform, Dudley has done his own arrangements on. We do “Leland Mississippi Blues” and “Hard Time Killing Floor Blues,” which doesn’t sound anything like the original. On “Palace Of The King,” we keep the verses kind of straight, but once we get into the jam breakdown in the middle, it’s really different. Dudley always adds something to make a song his own. 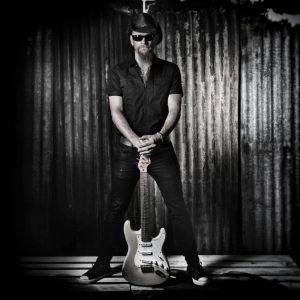 Dudley Taft: Last night, a Tuesday, the audience just sort of stood and stared at us. One couple who looked kind of bikerish came up afterward and said, “It’s too bad the crowd is so old.” The two of them were really into the music, so they looked around and wondered, “What’s wrong with these people?!”

WIB: We’ve all been there! And it’s not just the older blues crowd. I’ve been to rock shows with younger crowds where it’s the same. You’d think people who pay money to see a band would want to have a good time. But you see no emotional reaction whatsoever.

Darby Todd: I think it’s because people don’t give a shit about watching bands anymore. All they wanna do is stand there, hold their cell phones up and show it to their mates afterward, like: Guess where I’ve been! That’s half the problem. People aren’t enjoying the moment. They’re too busy getting a memento of something, rather than taking it in while they’re there.

WIB: I often hear that fewer people in the United States are going out to hear live music. Are there enough gigs to go around?

Dudley Taft: If you lower your standards!

WIB: So you have to play “Mustang Sally” at every gig?

Kasey Williams: I’ve never played “Mustang Sally” and I hope I never will!

WIB: Why do you think American bands love playing in Europe?

Dudley Taft: Well, I know several examples of people who can’t get arrested in America, but they come over and live in Europe and have a career.

Darby Todd: As Europeans, we tend to go “oh wow” – perhaps not so much in this day and age, but back in the day, having someone come over from America, you’d think, “Wow, they’re from America, they must be great!” Some are fantastic. But you get a lot of people who kind of play off of being the third cousin removed of B.B. King. You see them and think: A) You’re average, and B) That’s a bit of a stretch. In the end, good music wins out over everything.

Dudley Taft: You can get your foot in the door. But if people respond to your music and they want to come again, then you’re onto something.

Darby Todd: A lot of people play the bullshit card. It might last for a couple of years before people realize it’s fake.

Dudley Taft: Especially in the blues-rock genre, there are a lot of guitar players. Some musicians seem to believe that being a blues-rock artist means you can’t have songs that have bridges and what I call “tunnels” and other shit in there. I think at the end of the fuckin’ day, the song wins. The song will live on much past where we are now. The good songs have lasted. Since the fuckin’ 1920s! My dad plays Dixieland, so I probably know more Hoagy Carmichael than I should. But the great songs live on.

WIB: I think if you’re involved in the blues in any manner, but also frustrated by its conventions, you have two choices: You can either bow out and go elsewhere or stay involved and try to influence the direction it is taking.

Dudley Taft: The blues is not gonna survive if it’s choked off. Remember when R.L. Burnside had the drum loops and stuff? That was fuckin’ cool! Trance blues. I mean, why can’t there be beats in blues?

Darby Todd: Ultimately, you make music that you like, right? You don’t do it to appease a certain demographic. You just make the music you want to make. And if a certain group of people loves what you do, excellent. If another group of people feels it’s not for them, they should listen to something else.

Dudley Taft: People can sense the truth. They sense if someone has been true to himself or is just a poser. Someone once called me out for wearing a hat. Well, fuck you, you’re not bald! I look terrible onstage without a hat. Yeah, it’s a costume in a way. But I’m also dressing up because I want to put on a good show. I’m here to entertain people. I want to present the music in a way so that if I was watching the show, I’d think, yeah, that’s cool. Instead of seeing some dude onstage in jeans, where you’re not sure if it’s the sound guy. I wanna see a show.

I’m not saying I’m the answer. I’m just doing my thing and hoping people like it. If you’re doing something different, then maybe you’re adding a little bit. We need some vigor. Something vital. Some new blood. Like what the Black Keys are doing. Or the Raconteurs.

To me, things like that are what carry on the blues tradition and make it something new. So it can grow. Otherwise, we’ll just blow away in a pile of dust.

Thanks to Dudley Taft, Kasey Williams and Darby Todd for taking the time on a night off!