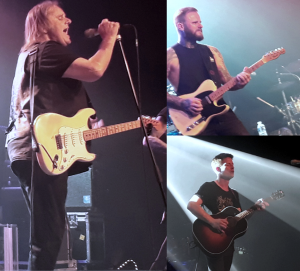 For me, it came one night after an intimate and thoroughly enjoyable club show. So entering this huge hall was like stepping into another world completely. Strange, but encouraging. So often, blues fans enjoy great bands in the company of a few dozen like-minded individuals. It is heartening to know that the right package of top-flight talent can draw a thousand people or more.

That thousand, give or take, arrived early and ready to party. Britain’s Kris Barras went on at seven thirty with a brief opening set that left the fans yelling for more. There’s nothing fancy about his approach, which is as brawny and down-to-earth as the former MMA fighter himself. A well-placed cover of Led Zeppelin’s “Rock And Roll” lit a fire under the audience. The jazzy southern boogie of “Wrong Place, Wrong Time,” Barras’s sensitive, Dad-dedicated “Watching Over Me” and the thumping rock of “Hail Mary” did the rest. The British four-piece came, conquered and made sure everyone knew about their upcoming headliner gig at a far less spacious nearby venue.

Walter Trout followed and the warm vibe in front of the stage immediately grew more jubilant. That’s not just because of Trout’s undeniable prowess on the fretboard, but because he – as an artist, songwriter and personality – is now universally respected as a grandmaster of the blues. Walter earns that respect by playing his heart out every night.

The moment that will endure in our memories immediately followed his version of Jimmy Dawkins’s “Me, My Guitar & The Blues,” a song featured on Trout’s latest Survivor Blues. Walter’s vocal was gut-wrenching and drenched in the blues, his playing full of passion and fire as it crescendoed to the finish. When the final note sounded, the veteran guitarist turned his back to the crowd, hunched over, put a towel to his face and wept. The contortions of his thick body told us what was going on. So we just kept on applauding, as did his band members in a touching salute. Still wiping away the tears, but now able to hold it together, Trout turned to his fans and announced: “Every time I play that song, it fucks me up. Did you feel it?”

Yeah, we felt it. Walter lightened the mood a bit with “Ride ‘Till I’m Satisfied,” then used “Almost Gone” to tell the story of his liver failure and to encourage those listening to register as organ donors. This, again, is why we love Walter Trout. Yes, there is pathos in his telling, but it is leavened with humor. When he stands onstage, he appears to us as just a regular guy who has been through shit. Bad shit. And we’ve all got our bad shit, though maybe not as bad as his. Makes me think of another Walter Trout album title: We’re All In This Together…

I stray. As the set progressed into Hound Dog Taylor’s “Sadie,” Trout’s own “Playin’ Hideaway” and the potent “Red Sun,” his five-piece was firing on all cylinders. Particularly badass was bassist Johnny Griparic, whose fingers drove the music with an intensity you don’t often see. Rory Gallagher’s “Bullfrog Blues” closed the set, all guns a-blazing, but it was not the last we saw of Trout.

There’s always seems to be an air of skepticism surrounding Jonny Lang, who has already been reviewed live on this blog. Perhaps it’s because he started his career so young and was instantly successful. More likely it’s because he made some stylistic deviations along the way, embracing soulful, even poppy sounds that didn’t sit well with the guitar crowd. Whatever the reason, now in his mid-30s, he seems to be forever proving himself.

Long story short: Lang’s nine-song set left no doubt he belonged on this stage. He laid the bricks with hard-driving cuts like “Signs” and “Snakes,” oozing with electric guitar, then stood atop that foundation, warbling like an angel on the lovely “Bring Me Back Home.” His heart-wrenching solo acoustic medley of “Breakin’ Me” and “Lie To Me” never gets old.

Lang’s five-piece band remained onstage for the jam session finale. Barras and Trout returned for an unexpected version of B.B. King’s “Gambler’s Blues,” each of the three featured guitarists getting his chance to shine. Griparic took over for Jim Anton on bass as the evening soared to a high-flying finish on “Goin’ Down.” It’s one of those songs you’ve heard a gazillion times, but the heavy artillery lined up on this big stage in Cologne did it justice.

Rockin The Blues 2019 continues in Munich, Hamburg and Frankfurt this week before moving on to Tilburg (NL), Paris and London. More info at www.rockintheblues.com 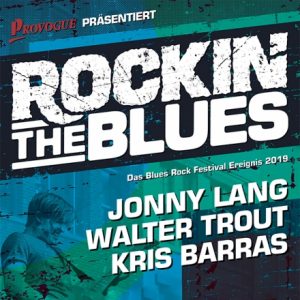