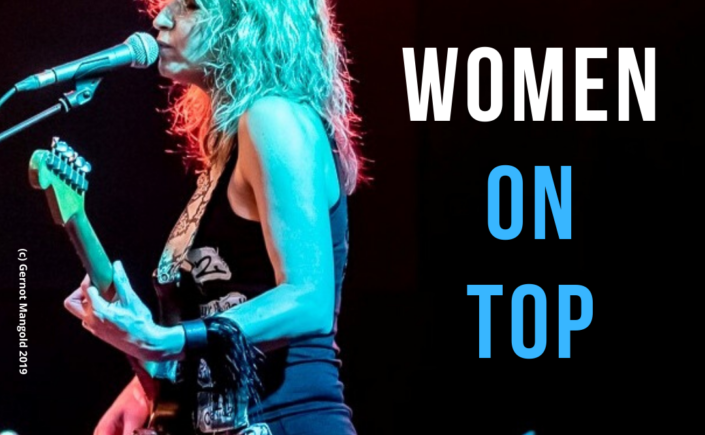 Sometimes, the cynic in me thinks this ongoing revolution is based on pure lecherousness: Older guys, who still comprise the majority of audiences, get a thrill from watching young, attractive women play their favorite kind of music. But there’s probably more to it than that. Maybe we’re just a little bit tired of what many of their male colleagues are bringing to the table. Tired of the rehashed Albert King licks, weary of hearing the 947th version of “Hey Joe.”

Don’t get me wrong: Women are guilty of it, too. Just think how many “next Janis Joplins” we’ve seen come down the pike. As with their male counterparts, female blues artists who bring something truly original to the blues remain the exception.

Current female blues artists from Europe might even have an advantage in this sense. Because there’s essentially no tradition there to draw upon or feel indebted to. They can pick and choose and create freely. Three examples: Ana Popovic, Ghalia Volt and Erja Lyytinen, each of whom recently toured around the continent. 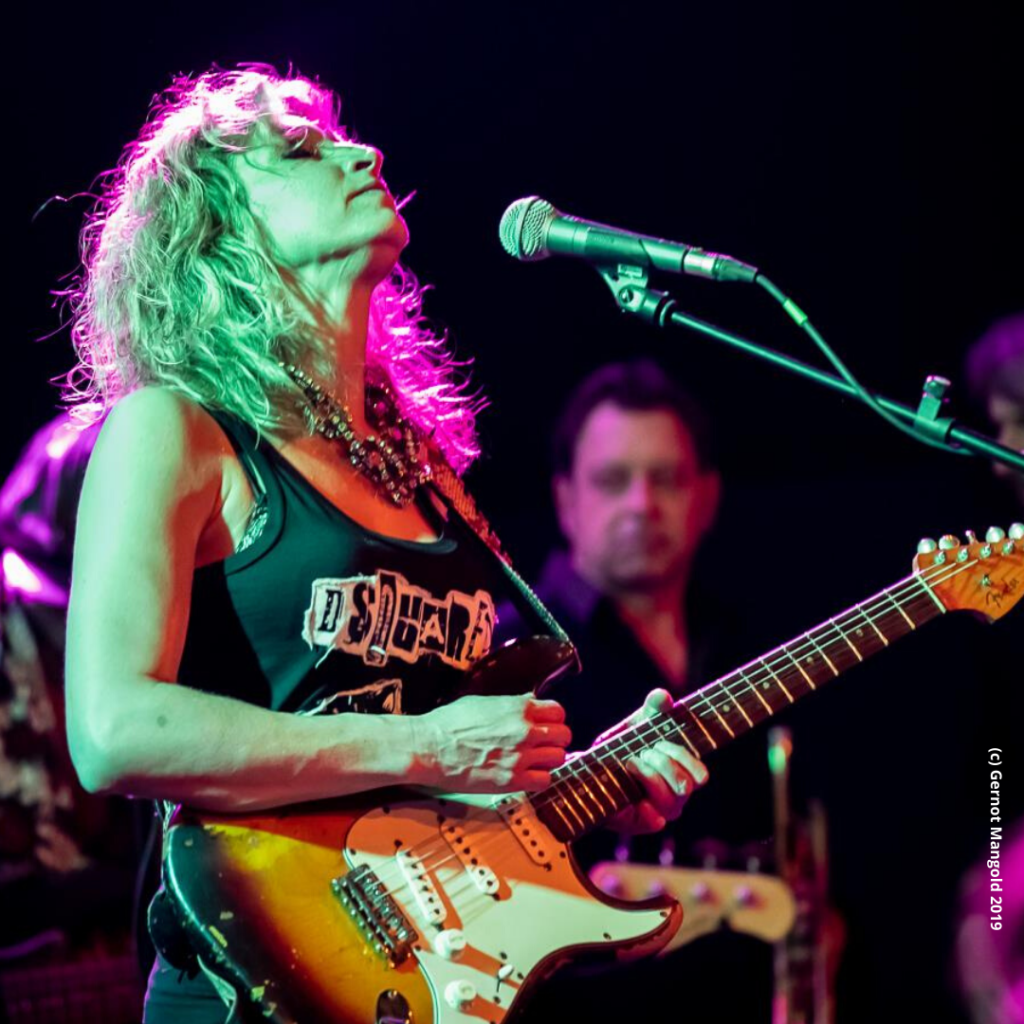 Ana Popovic’s ascension to the top of the heap has been something to behold. I first encountered Ana some 20 years ago, opening for Bernard Allison in a small jazz club in Bonn, a young lady in red spandex who was palpably unsure of herself. A perfectionist and student of the guitar who left her native Serbia for a musical education in the Netherlands, Popovic has since become a stylized blues, funk and soul goddess with a strong following on both sides of the Atlantic. Her move to the United States some years ago – first to Memphis, then to Los Angeles – boosted her credibility and connected her with high-pedigree studio and road musicians.

Popovic’s past few albums, especially Can You Stand The Heat (2013) and Like It On Top (2018), have moved more heavily toward funk and soul – the two elements that drove her spirited performance at Cologne’s Club Volta. Early on, as she featured a number of cuts from those discs, it was clear we were witnessing first-call musicians in a tight six-piece band that included keyboards and a horn section. But due to sound issues, all we really heard were the bass and drums. Try as I might to find a sweet spot in front of the stage or further back near the mixing desk, it was impossible to truly connect with Popovic’s performance, as her voice and guitar remained largely inaudible.

About halfway through, I found myself shouting in the direction of the stage. “Play some blues!” Or maybe I was just wishing, internally, that she would play something more bluesy.

When Popovic did just that, laying down some tasty slide guitar on a Texas-style shuffle, the fog cleared and the room filled with light. There it was, the irresistible power that had been missing through all the fancy, densely arranged funk numbers. Whether by design or spontaneously, Popovic stuck to this “keep it simple” approach the rest of the way, displaying her guitar mastery throughout an exhilarating bluesrock-oriented second half of the show.

Having now been at it for more than two decades, Popovic deserves credit for paving the way for other blues-loving, guitar-playing sisters from the European continent. 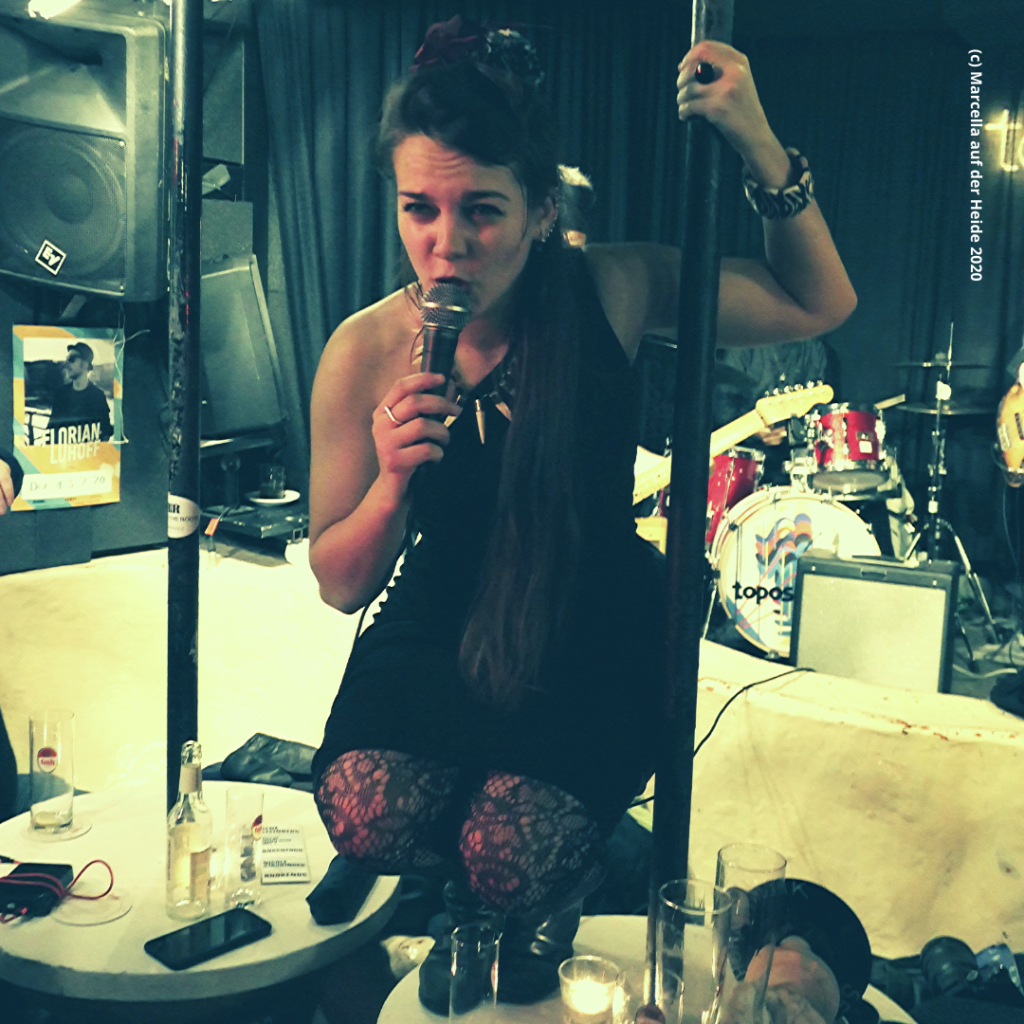 Brussels-born singer, songwriter and guitarist Ghalia Volt (aka Ghalia Vauthier) is fairly new to the scene, having debuted on record with her Belgian project Voodoo Casino in 2016. Hungry and restless, like Ana Popovic, Volt set her sights on the US and settled in New Orleans, where she hooked up for a successful run with Johnny Mastro & Mama’s Boys.

With 2019’s Mississippi Blend, the European export then made a bold move: Recording at the Dickinson brothers’ storied Zebra Ranch in Coldwater, Mississippi, together with Cody Dickinson, Cedric Burnside, Lightnin’ Malcolm and others, Volt spurned the Texas and Chicago influences often heard on current blues releases in favor of a deep, jagged, groovy North Mississippi vibe. It set her apart from the emerging crop of young guitar slingers and made her one to watch in the future.

But boy did she have her hands full one Friday night in Leverkusen, Germany. The small crowd gathered inside the extremely intimate topos club was oddly irresponsive, and no amount of table walking was going to change that. The strong versions of “Gypsy Lady” and “Meet Me Down the Road” with which Volt opened the evening failed to win over the crowd, and things plodded along after that despite her every effort to get the party started. Not even “Wade In the Water,” delivered soulfully, would do it.

A shame indeed, because Ghalia’s tour band was the real deal: Lightnin’ Malcolm (somewhat miscast) on lead guitar, Dean Zucchero on bass, Lee Andrew Williams Jr on drums. Road-tested players who have done their thing at major festivals and in little dives all over North America and Europe.

The onlookers perked up a bit when Lightnin’ Malcolm took over and ventured deftly into Junior Kimbrough territory with “All Night Long.” But by and large, there was a disconnect between the audience and the four musicians inhabiting the cramped stage. And when that happens … well, there’s little you can do.

But I’ll go on record as saying: There is definitely something there. Ghalia Volt is not your typical SRV copycat in a dress. She can sing. She can play. And, perhaps most importantly, when she does sing or play, she seems to mean it. 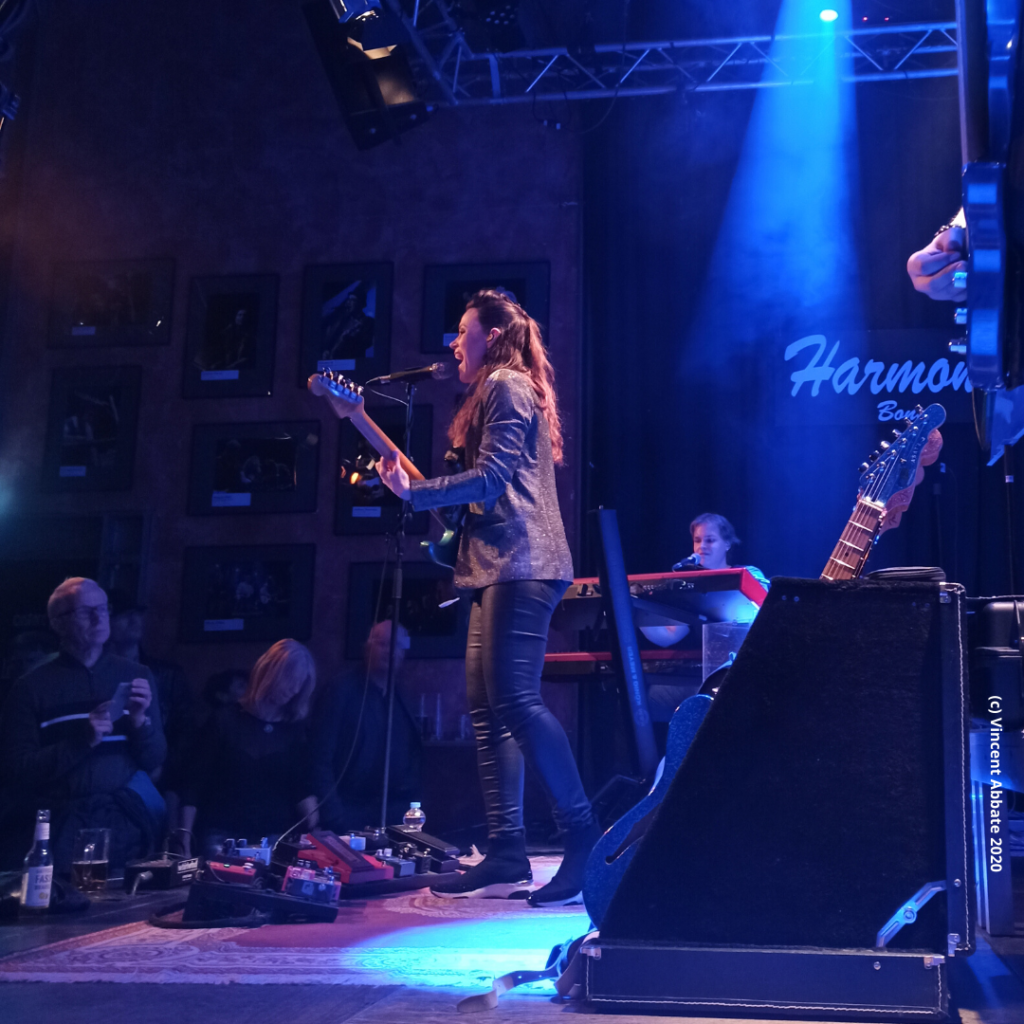 At last, a charmed night on which it all came together.

A frontwoman in total control. A band supporting her brilliantly. Good sound, good lighting. And an eager crowd that was on every note and every rhythmic flourish, borderline ecstatic from start to finish.

Hailing from Kuopio, Finland and based in Helsinki, Erja Lyytinen has forged a career that roughly parallels that of Ana Popovic. She first appeared on record around the turn of the millennium, then broke out internationally when she hooked up with Ruf Records and its annual Blues Caravan tour in 2006. Since then, her star has risen steadily, particularly in the guitar community; in a recent poll on GuitarWorld.com asking readers to choose the world’s best blues guitarists, Lyytinen came in at #14 – ahead of acclaimed axemen such as Robben Ford and Robert Cray and one of only two female guitarists to make the top 30.

Lyytinen’s stellar set in Bonn showed off the ease and grace that are hallmarks of her technically sophisticated playing. Ably executed by Tatu Back on bass, Iiro Laitinen on drums and Miika Aukio on keys, songs like “Cherry Overdrive,” “Black Ocean,” and “Slowly Burning” showcased Lyytinen’s ability to move from melodic rock and funk through blues and pop with the adventurousness of a Jeff Beck or a Sonny Landreth (the latter of whom guests on her most recent album Another World). The shuffling “Everything’s Fine” chugged along powerfully, while Erja’s chiming slide guitar on an adaptation of Curtis Mayfield’s “People Get Ready” provided ample goosebumps. Even the unconventionally structured “Rocking Chair” went down like a glass of lemonade on a summer afternoon – if you can get people dancing in 7/4 time, you’re doing something right.

“I’ve never seen a blues concert like this before,” said one onlooker as we were both using the gents between sets. Curious, I asked if he meant it in a positive or negative sense. He looked at me like I was nuts. “Positively! She’s amazing. Ritchie Blackmore could learn a thing or two.”

Anyone who hoped this modern queen of slide guitar would stick strictly to the blues may be disappointed. Her Elmore James tribute The Sky Is Crying, recorded in 2013, left little doubt that the blues is in her wheelhouse. But she’s constantly developing, taking risks, crossing borders and, in my eyes, just keeps getting better and better. After 15 years in international blues circles, Erja Lyytinen has become a consummate performer and a master of her craft.