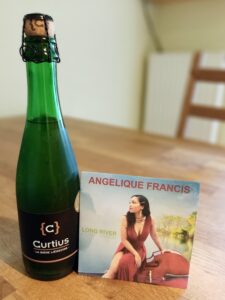 So why was I listening to Long River in the first place?

I was prepping for the Grolsch Blues Festival in a few weeks’ time. The mid-sized three-day outdoor event is one of Germany’s best and a great place to discover new artists. The organizers pride themselves on thinking outside the box, and though traditional blues is always included in the program, you’re just as likely to hear soul, funk, country, bluegrass, gospel, world music or any combination thereof. It’s not three straight days and nights of twelve-bar blues. Call me crazy, but to me, that’s a good thing.

So in the course of familiarizing myself with the artists on this year’s bill, I gave Angelique Francis a spin. A multi-instrumentalist whose primary instrument appears to be the bass. Her true calling card, that which makes you sit up and listen, is her voice. I disagree with what’s written in her media info, though. Hers doesn’t strike me as an old-school, road-hardened blues voice like that of Bessie Smith or Koko Taylor. At least it’s not only that. Francis also shows off the amazingly flexible, softer tones of a songbird. Harmonies abound. She would sound right at home on a contemporary R&B record.

Her music displays all kinds of influences, but hits on enough blues to satisfy the hardcore fan. Take “Ashamed,” for instance – the song that pulled me in. Its structure is not unlike “Mannish Boy” or “Hoochie Coochie Man.” But Francis disarms the listener by singing not of her own magnificence or sexual prowess, but her weakness in falling for a predatory man she knows is toxic.

The songwriting is strong and full of surprises. Following “Ashamed” we have “Snow Rage,” a tune that could only come from a place where winters are severe. The premise sounds silly, but Francis is spellbinding as she vents her anger at an inconsiderate snowplow driver. Many of her stories spring from a well of heartbreak and hurt, but she uses them to express innate strength and belief in herself. There are straightforward love songs, too. Over the course of 14 tracks, a bold and striking character emerges. Francis is chock full of attitude and doesn’t hide behind blues platitudes.

See what you think of “Snow Rage” before we get to our little beer tasting on the other side. There’s a crack electric band at work here, by the way.

The full name of today’s beer is Curtius – La Bière Liégeoise (“The Beer from Liége”). Oddly, there’s disagreement about what type of beer it is. The website Untappd categorizes it as a pale ale. The brewery itself calls it a blonde beer, so let’s go with that.

Upon first examination, I’m taken aback by a fairly large white glob of something resting at the bottom of the bottle. My guess is that Curtius is a bottle-conditioned beer and that it’s some yeast residue. I’m curious enough to drink the glob along with the beer, though the brewer suggests leaving it where it is.

I untie the muselet, uncork with a resounding pop (rare beer drinking activities indeed!), carefully fill my glass and … the yeast glob stays put on the bottle floor. So there’s that dilemma solved.

Curtius is a pale, cloudy brew with lots of body. A thick, sturdy head. The aroma is delicate and bready, hinting at the combination of barley and wheat malts. The first sip comes across as very dry and prickly, but the longer it plays on the palate, the more quaffable it becomes. The beer’s taste is pleasant but hard to describe; at one point in reminds me of a pear brandy. Best of all, it feels very fresh for a bottled beer. Very much alive. 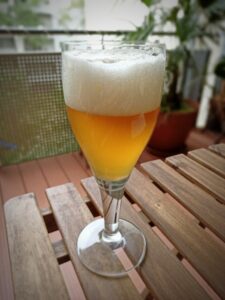 When I heard Angelique Francis’s “Heaven Water” for the first time, I knew instantly it would be one of the featured tracks at this Listening Party, because … it’s obvious, isn’t it? Beer, Heaven Water … I mean just look at that glass! I’m not sure if we’re talking simile, metaphor or analogy here (I get these literary devices mixed up, shame on me) but “Heaven Water” is now my new favorite nickname for beer.

Francis’s intentions would seem to be more earnest as she sings “heaven water from the sky, take the pain from my life.” Rain as a metaphor (simile? analogy?) for a healing power that comes from above?

Sorry, but beer works on that level, too. Who among us – as we partake of a cold one – hasn’t seen their emotional distress and even physical pain vanish as if by magic?

Anyway … Angelique Francis is definitely one to watch out for. She’s done me a service by kicking that previously closed door open a few inches. The promise I hear on Long River may just lead me to rethink my jaded stance and get back in the game.