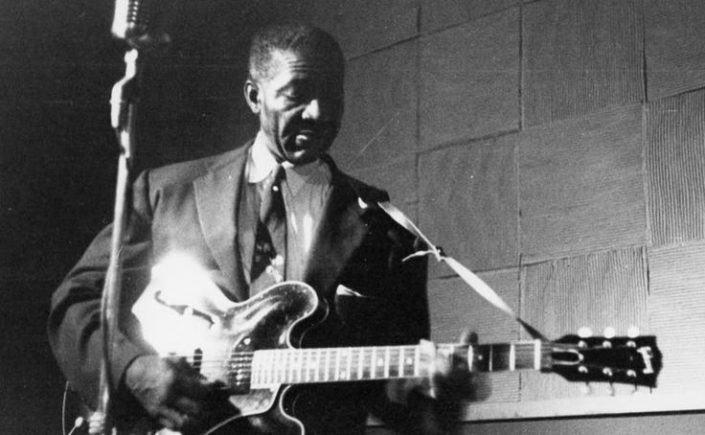 Lonnie Johnson (with Elmer Snowden) – “Memories of You”

One afternoon in May of 2000, Grammy-winning author and record producer Chris Albertson welcomed me into his Upper West Side apartment in Manhattan. Then it was story time.

Chris spoke about discovering jazz as a teenager in Copenhagen in the 1940s and how he bluffed his way into a job for Danish radio. He talked about emigrating to the US in the mid-50s, his days as a DJ in Philadelphia and subsequent producing gig at Riverside Records. At the time of my visit, Chris was revising Bessie, his standard work on blues singer Bessie Smith, so there were plenty of Bessie stories, too. Indeed, it was Bessie’s voice that had originally called him to jazz and provided the spark for a life devoted to music.

But my real reason for wanting to meet Chris Albertson was because his name appears on the sleeve of one of my all-time favorite blues records: Blues & Ballads by Lonnie Johnson with Elmer Snowden.

I’m not old enough to have witnessed Lonnie during his lifetime and was not even aware of him until the 1990s, some 25 years after his death. But that recording – which is very much what it says, an exceptional collection of blues and ballads – helped cement my love of the blues and affected me in a way that’s similar to Bessie’s influence on Chris.

Chris supervised the recording of Blues & Ballads in Englewood Cliffs, New Jersey in early 1960. (The sleeve says it was April 5, while Albertson recalls it being roughly a month later. Undisputed is that it was done in a single day.) He bought the guitar Lonnie plays on the record. Some months earlier, he had “rediscovered” Lonnie, who – unbelievably – was employed as a janitor at a Philadelphia hotel. He’d heard from Snowden that Johnson was in the city and put out an open call on the air at WHAT, asking anyone with more information to call the radio station.

“Somebody called and said ‘I work with a Lonnie Johnson at the Benjamin Franklin Hotel. I don’t know if he’s a musician or anything, but that’s his name and he’s about the right age.’ So I went down there and got the supervisor, and he says, “I don’t know if he’s a singer, but I can tell you one thing. He’s very careful with his hands. He always wears gloves.’” 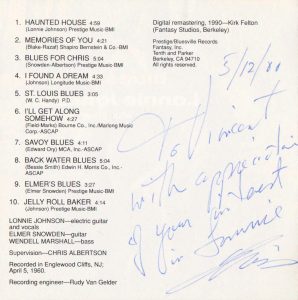 “With appreciation of your interest in Lonnie.”

The guitar Lonnie owned at the time was, in Albertson’s words, “very old and very beat up,” but Johnson, always protecting those precious hands of his, hadn’t lost his touch. A comeback album, Blues by Lonnie Johnson, preceded the collaboration with Snowden, an accomplished guitarist, banjo player and band leader who had worked with Count Basie, Duke Ellington and others but who was now getting by as a parking lot attendant.

“The night before the session,” Albertson recalled, “Lonnie calls me up and says, ‘Chris, be careful. Because when Elmer gets too much to drink, he gets sloppy. So make sure he doesn’t drink.’ Shortly after that, Elmer called me to warn me about Lonnie!” Two outstanding musicians, resigned to menial labor, were looking to grab the brass ring. “They were like two little kids.”

“Haunted House” establishes the hushed, unhurried mood of Blues & Ballads, which revisits classics like W.C. Handy’s “St. Louis Blues,” Bessie Smith’s “Backwater Blues” and Johnson’s own, bawdy “He’s A Jelly Rolly Baker.” “Memories Of You” is his shining moment as an interpreter of heart-wrenching ballads.