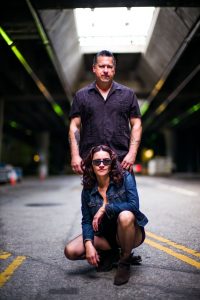 Blinn would go on to hone his considerable guitar skills in a combo called the Mississippi Mudsharks, popular in San Diego and especially in Europe, where they toured successfully throughout the 1990s. Subsequent projects have included Mississippi Mud (with former Social Distortion harmonica player Eric Von Herzen) and the Tiki Torchers (with Hooters drummer Dave Uosikkinen).

Black Market III formed in 2011 (originally as Black Market Baby) and has been going strong since, with four studio albums and a live disc to its credit. There are no set rules here beyond playing what the band refers to as “hard-hitting soulful blues and American roots music with reverence to all the original blues men and women.”

The band was just back from a two-month tour of Europe and busy with a stage production of From Dusk Till Dawn when Scottie Blinn and I hooked up to discuss the new record Dashboard Jesus, now out on Rip Cat Records.

Who Is Blues: Let’s start with one for those who are unfamiliar with Black Market III. You’ve described your music as “blues and rock” rather than “bluesrock.” Can you elaborate on the difference? Does the term “bluesrock” have a negative connotation for you?

Scottie Blinn: My background from an early age is in traditional blues. From the age of 19, I grew up playing with a real bluesman from Texas named Tomcat Courtney. I still do when we’re home and off the road! He’ll be 90 years old in January. Anyway, I also grew up with every kind of music imaginable. But my heart is always in the blues. One thing I love about our band is we can branch off into whatever direction we like, but when it’s time to play the blues, we play THE BLUES.

I’m not a shredder by any means and I’m not a fan of “shred blues” so to speak. I feel wherever we go, I’m still hearing Lightnin’ Hopkins in my head. I don’t look at “bluesrock” negatively. The blues comes from each person’s individual heart and soul. So if that’s your deal and how you express it, go for it!

WIB: Two of the bands you’ve covered extensively from the rock side of things are Led Zeppelin and Tito & Tarantula. What about their music appeals to you?

Scottie Blinn: What doesn’t?! Roxy and I grew up with Led Zeppelin. They are our favorite rock band. We identify with the ability to keep the blues as a strong root, while exploring and creating an individual voice with the music.

We paid our personal tribute to them with our last CD, Black Country, faithfully recording eleven of our favorite Zeppelin songs. What would have taken them a week, took us six months! It was like going to four years of university learning and performing those songs, most of which are deeper cuts like “10 Years Gone,” “The Rain Song” and “Out On The Tiles.”

We had an agreement. If the end product wasn’t outstanding, we wouldn’t put it out and never tell anyone we did it. There’s always the question of “why” as well. Why? Because we wanted to thank Led Zeppelin for the music they gave us, but also to really challenge ourselves. I’m happy to say the first run has sold out. For the record, Roxanne owned the vocals!

Tito’s influence for me goes back to my love of punk rock. (I feel the original blues musicians were also the original punkers.) The Plugz, Los Cruzados and then Tito & Tarantula. Dark, rockin’, Hispanic influences, beautiful melodies to all-out aggression.

A highlight of my career was playing with them at the Rockhaus in Salzburg, Austria.  We also just had the honor of performing in a live production of From Dusk Till Dawn. Three nights in a recreation of “The Titty Twister”! We came home from Europe in the beginning of October, jumped into rehearsals, and then knocked out those three amazing nights. 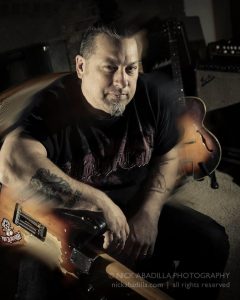 WIB: And on the bluesier side of things … name three of your favorite artists or biggest influences.

Scottie Blinn: T-Bone Walker, Lightnin’ Hopkins, and Freddie King. But I’m also adding Tomcat Courtney, my favorite of them all. He’s the reason I “get” the blues!

WIB: I told you recently I enjoy your guitar playing because you play with restraint. You joked and said it’s because you can’t play any better or faster. But isn’t restraint and letting notes breathe and leaving space between licks also a question of taste?

Scottie Blinn: I have good taste . . . haha! Seriously, guitar playing is about rhythm first. That’s what’s gets ‘em hooked. Soloing to me should be an extension of the vocal, another way to express the song. Soloing to me isn’t about showing off. It’s about having a conversation, telling a story, and expressing emotion.

When I’m in a conversation, I prefer it clear, concise, and articulately expressed . . . and interesting!! Nothing worse than a nervous, obnoxious loudmouth with nothing of real substance to say, other than to hear themselves talk.

So yes, breathe, let people take it in, make every note count, and allow the space to make a bigger impact.

WIB: How does your new album Dashboard Jesus compare to previous releases in terms of style and material?

Scottie Blinn: Like I mentioned, we like to really branch out and explore new territory. This outing, while thick with the blues, has led us into combining soul and Latin influences, such as Otis Blackwell, Bobby Bland and Tito Larriva. There’s a lot of percussion, more subtlety, and even deeper maturity in the approach. But when it’s time to rock . . . it rocks!!

WIB: Who else plays on Dashboard Jesus besides you and Roxy?

Scottie Blinn: We were blessed to meet Alan West from one of our favorite San Diego bands, The Fremonts. He was formerly with James Harman and is a go-to guy in So Cal. Alan really brought in an authentic Latin vibe with his unorthodox drumming and masterful percussion.

As for the rest . . . let me take a deep breath. Special guests include one of my heroes, Anson Funderburgh, on guitar, Carl Sonny Leyland on piano, Roni Lee (The Runaways, Venus & The Razorblades) and Joey Harris ( The Beat Farmers) on back-up vocals, and Cami Smith (Lexington Field) for “O’ Mary Don’t You Weep,” Tomcat Courtney on a cover of the original “Gallows Pole,” Gary St. Clair (from 60s band Flavor) on B3 for a dark version of “House Of The Rising Sun,” our dear friend Billy Watson on chromatic harmonica playing (and co-writing the cut “Your Love Is So Cruel” with Roxy), Jesus Cuevas (Los Fabulocos) on accordion, Jules Whelpton (Roni Lee Band) on violin and Brianna Wallace on violin on the Tito Larriva Song, “Regresare.”

WIB: Tell me about some of the song picks on the album, specifically the cover songs and where you discovered them.

Scottie Blinn: Our friend Bill Butler brought us the first track, “Daddy Rollin’ Stone” by Otis Blackwell. I also love the Blasters version. It was a no-brainer. We have a killer video planned very soon.

Roxy heard Tomcat do his version of Bobby Bland’s “ I Wouldn’t Treat A Dog” and brought it to the table.

We’ve been doing a crowd pleasing yet original and dark version of “House” for a while. The stacked harmonies are amazing! The video will be out soon.

“Regresare” is a beautiful song by Tito & Tarantula. Roxy sings in Spanish. It’s a song of love lost, and returning to Mexico. Seemed timely and appropriate to us with the current situation in the U.S.  We shot a video at some amazing locations, including Sunset Cliffs in Ocean Beach, CA, the San Diego Mission, the church from the movie “Kill Bill” in Lancaster, CA and Alan West’s “ Rhythm Ranch.”

WIB: You also recorded new versions of some Black Market III classics. What was the motivation behind that?

Scottie Blinn: We had a couple of songs we consider our best that we wanted to update, and give a chance to reach a bigger audience. Scott Abeyta, the owner of our new label Rip Cat Records, was very supportive of that decision.

WIB: Just a couple of more general questions. For one, are you still involved in music education in the San Diego area?

Scottie Blinn: Not as much as seven years ago before this band, but yes. I’m actually the guest at an upcoming workshop in San Diego. The topic is “Outside The Box.” How appropriate! I’d love to jump back into it, but we’re recording and touring all the time. There will be time later.

WIB: Before I let you go, I stumbled across this tidbit online. “In 2004, he and his wife Roxanne were married in Antwerp, Belgium, by famed New Orleans musician Dr. John.” What???!!!

Scottie Blinn: True! It was after a festival my former band The Mississippi Mudsharks played in Antwerp, Belgium, directly opening for him. A highlight in life!