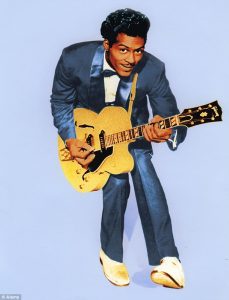 Zito is busier than ever running his budding record label (which he talks about here), but found a few minutes to share his thoughts on the new record with Who Is Blues.

Who Is Blues: Though you’re both from St. Louis, I don’t automatically associate Mike Zito with Chuck Berry. In a few words, how did he impact what you do?

Mike Zito: Well, I grew up in the 70s and 80s. Chuck Berry was just always there, his music and his legend. When I was a junior in high school they made the film “Hail Hail Rock n Roll” in St. Louis. It was all over the news that they were filming and doing a big concert at the Fox Theater with Keith Richards, Jeff Beck and Eric Clapton. Later, when I was working at a music store, his son Charles Jr. would come in and hang out and bring his father with him sometimes. I was able to open for Chuck at Blueberry Hill in the Duck Room a few times.

He has always been there and been a big part of music for me living in St. Louis. It’s like when Stevie Ray Vaughan came along, suddenly you had all of these guys in hats with Strats in Texas playing like him. I didn’t realize it, but everyone played like Chuck in St. Louis. Everyone was influenced by him and his great music. I just grew up playing a lot of those songs in bars for years.

Who Is Blues: As I’m sure you know, Chuck left behind a reputation of being an SOB. What was your experience in your dealings with him?

Mike Zito: He was nothing but nice and super generous with me. He was never anything but that. I think people have expectations, and I did not have any. I had a guitar cord made for him and the shrink wrap said “My Ding A Ling.” He loved it.

Who Is Blues: How did you go about recruiting people to play on the record and who decided which songs they would play? Did anyone say no to the project?!

Mike Zito: Well…I have been working on this for about two years. I reached out to my friends and of course guitarists I really look up to and just asked them about playing on the record.

No one actually said “no.” I had a few that were under contractual situations that could not do it and a few that just never got back to me. But everyone I actually spoke to said yes.

My problem was that I had too many guests that said yes! I hated to have to leave some folks off. My hope is that this will do so well, I will do a Volume 2! 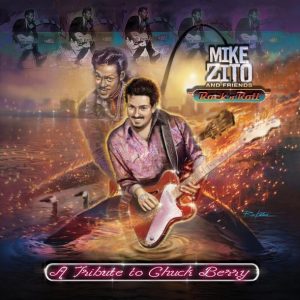 Who Is Blues: Richard Fortus of Guns N’ Roses fame does a slick version of “Maybellene.” He’s another St. Louis native. Do you and Richard go back a while? What do you think of the track?

Mike Zito: Richard Fortus gave me my first official guitar lesson. I was 14, he was 17. He worked at Ancora Music in Afton, Mo. He later became the most popular guitarist in town and I would go see his band The Eyes (later Pale Divine) play every chance I got. He’s probably one of the most influential guitarists on my technique. Plus, he’s a hell of a nice guy and a badass guitar player. I love this track and his fierce picking.

Who Is Blues:  You also feature Chuck Berry’s grandson on one cut. Do you see or hear any of the master in him?

Mike Zito: As I said earlier, I knew Chuck’s son from the music store I worked at, although he was not always that into playing guitar like his father. I can imagine being the son of Chuck Berry makes that a little more difficult to enjoy. But Charlie Berry III is really into it and he’s got it! My son Zach knows Charlie and I started to see him on Instagram playing guitar and learning licks. He’s really into learning his grandfather’s style and getting it right. He impresses me.

I think he kicked ass on the track and nailed it. He is also a very nice young man, sincere and works tirelessly on the guitar.

Who Is Blues: Of the 20 tracks on the album, which ones stand out for you?

Mike Zito: I honestly love the entire album. I really enjoy hearing the different artists put their spin on the tracks and make them come to life.

If I had to pick one … I think “Memphis” with my friend Anders Osborne is very special. Because Anders and I are close, we spoke about the track. That song is very, very sad.

It’s not the usual party, cars, girls, school songs. I was always a bit confused as to why the track was so “upbeat.” So, Anders and I made sure we put some “melancholy” in the track.

I think it’s fantastic and it’s the only song that is completely sung lead by another artist.

Here are Mike Zito and Walter Trout, raising the roof with “Johnny B. Goode.”