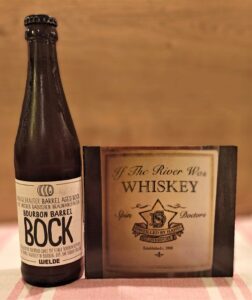 Here is – IMHO – what distinguishes If The River Was Whiskey from your standard-issue blues record.

The musical pedigree of the classic Spin Doctors lineup with Aaron Comess on drums, Mark White on Bass, Eric Schenkman on guitar and Chris Barron on vocals is beyond reproach. But this isn’t a bunch of technical wizards wowing us with their chops. The veteran cast takes a song-based approach. The lyrics make sense. They’re intelligent. Finally, you’ve got Barron’s charmingly offbeat vocals compelling you to listen. His phrasing is extremely musical – the way he pushes and at pulls at the rhythm keeps you on your toes.

“Traction Blues” is a wonderful example.

The fiery guitar playing there is the great Toronto-based axeman Eric Schenkman. He’s a key presence in that city’s blues scene and has released some albums in his own right that are well worth checking out.

Straight into the next cut – the whimsical “Ben’s Looking Out The Window Blues.”

The faux label of the whiskey bottle on the cover of If The River Was Whiskey states “Distilled by hand – No overdubs” and you can hear that in a good way on “Ben’s Looking…” and throughout the album. If I recall correctly (I interviewed Schenkman when the record came out), the band initially had no intention of releasing these recordings, which were intended as demos. So they’re not polished. Which is fine with me. I tend to prefer records that make no pretense of perfection. How about you?

OK, so the name Bourbon Barrel Bock tells you most of what you need to know about what we’re drinking today. The southern German Welde brewery conditions this bock beer in wood barrels for three months – though the fine print states they are in fact bourbon, rum and tequila barrels. It’s also cold hopped with a hop variety I’m not sure I’ve ever come across: green bullet hops. The beer’s specs suggest a drinking temperature of 12° Celsius (about 54° Fahrenheit) – so it’s been out of the fridge for a little while.

It pours a pretty amber. Sparkling clear. The first heady whiff is giving me some aromas I’m struggling to identify (biscuit? Graham cracker?) and when I take my first sip it hits me: This actually resides somewhere between a beer and a neat glass of bourbon.

While I deepen my acquaintance with this unique adult beverage, I invite you to enjoy the six-minute “About A Train,” a song that first appeared on Spin Doctors’ third studio album You’ve Got To Believe In Something from 1996.

Smooth, sweet and mellow is this Bourbon Barrel Bock. Quite an unusual taste for a beer. Don’t know if I’d reach for it on a steamy summer afternoon with the sun blazing down – the 6.6 % ABV gives it a woozy heaviness – but later in the evening, as now, listening to the blues … as Chris Barron sings on the title track below: If the river was whiskey, you’d have no trouble drowning me. 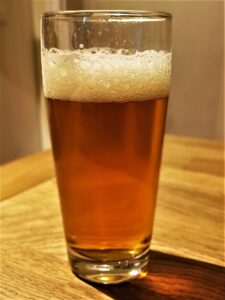 That’s all for a while, my friends. I’m glad you’ve been with me this first year and a half. Really – because who wants to drink alone?! I’m breaking for summer now, but that doesn’t mean I won’t be scouring the earth (or Germany and Holland at least) for more great beers to pair with my favorite blues albums. So look for me around Labor Day. And have a great summer, no matter what this cruel, corrupt and crazy world throws at you.

Spin Doctors, take it on home.