But never mind that. For all his modesty regarding his musical skills, the slim, clean-shaven Chicagoan can carry his weight on at least four different instruments. He learned piano as a boy and later earned a degree in trumpet from the Indiana University School of Music. Around Chicago, where he’s been active on the blues and roots scene for close to two decades, he’s still known as a pianist and trumpet player. But some five years ago – with an assist from fellow Windy City native Jimmy Sutton – the whole JD McPherson thing happened. Since then, Corcoran has been recording and touring the world with the Tulsa-born singer and songwriter sometimes referred to as “The Future Of Rockabilly.” His meaty tenor sax fortified cuts like “Mother Of Lies” and “It’s All Over But The Shouting” on McPherson’s exuberant 2015 release Let The Good Times Roll. For 2017’s Undivided Heart & Soul, he shifted almost exclusively to guitar.

Before a recent show in Belgium, Corcoran talked about how he went from the Monday jam nights at Buddy Guy’s Legends to playing 1500-capacity venues in the capital cities of Europe.

Who Is Blues: When you’re not touring with JD McPherson, you’re still involved in a bunch of different projects in Chicago, right?

Doug Corcoran: Well … yes and no.

WIB: Your commitment with JD has taken over?

Doug Corcoran: Yeah, for sure. I guess I can’t consider myself freelance anymore. I still tell everybody I’m in a lot of bands at home. But really, ever since the album cycle for Undivided Heart & Soul began last October, I’ve been busy with this. We’ve been out most of the time since September. I’ve only had a handful of gigs in Chicago since last fall. I’ve played steady in five or six bands and don’t do a lot of jobbing or freelance stuff. And I still wouldn’t say I’m not in those bands. But they don’t call as much as they used to.

Doug Corcoran: It’s been a gradual process. More gradual in some bands than others. I still have a couple that are steady that don’t work a lot. But I still get the calls. The right of first refusal, I suppose. Gigs that I’m always welcome to come back to. Which is important. Knowing that when I go home, I’ve still got a couple of steady jobs.

WIB: What about the gig at Buddy Guy’s Legends?

Doug Corcoran: That’s one of those steadies. I’ve known Brother John Kattke since I was about eight years old. He was my piano teacher. I started playing with him when I was in high school. So I’ve been with John since 2000. I’m going into my nineteenth year on the Buddy Guy gig.

WIB: What does it mean to be a member of the house band there?

Doug Corcoran: We mostly play the Monday jam nights. We do a ninety-minute set and then host the jam, which goes on for a couple more hours. John’s been doing the Monday night jam for twenty or twenty-five years. He’s really good at feeling out the musicians and putting groups onstage that work well together. Even though they’re all strangers and they’re usually from all over the world. You’ll get somebody from Japan up there with somebody from Australia and somebody from Chicago to kind of hold it down. The club is very touristy – even more than it used to be. It’s not as much a place for local talent to hang out anymore. Not like the old club was. It moved some years ago. The new location is not nearly as charming.

WIB: You play trumpet, saxophone, guitar and keys. Did you have formal training?

WIB: Why aren’t you playing more sax with the band?

Doug Corcoran: There’s just not enough room in the set anymore. There’s no sax on the new record. Except for a small part on “Crying’s Just A Thing You Do.” I think I did two tenor tracks and a bari track. There was even more sax on the song before and it was like, “Eh, it doesn’t really fit.” With the new direction the band is taking, I guess it doesn’t sound as cool. 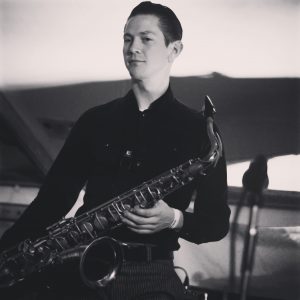 WIB: So, how did you hook up with JD McPherson?

Doug Corcoran: Through Jimmy Sutton. [Editor’s note: Jimmy is JD McPherson’s bassist and the founder of Hi-Style Records.] I had worked with him a little bit in Chicago. Not that much, but we knew each other. And I was a fan of his bands when I was in high school.

WIB: When the call came, what were they looking for? Someone who could double on horns and guitar?

Doug Corcoran: Not at that time. The first time they asked me if I was interested – this was around 2012 – they were putting a touring band together and asked me about doing piano. I had a very heavy schedule at home and it didn’t work out. So I was just sort of on the radar. Then they got Ray (Jacildo) to play piano. Not long after that, they asked me about playing sax. I really wasn’t a sax player at the time. I told them if I could borrow one, I could learn to play it.

Once, Jimmy had asked me who my favorite sax player was. I said Sam Butera. He found that interesting. Most guys would say John Coltrane. The band had already used a lot of really good players that just weren’t a good fit. Really proficient jazz players. So I think when I said Sam Butera, that struck a note with Jimmy.

Anyway … a few months went by and I borrowed a tenor sax from a friend’s dad. Like an old student horn. I had fooled around with alto and bari sax before, but I’d never picked up a tenor. So I called Jimmy and reminded him that we had talked a while back. “Just want to let you know I borrowed a tenor…”

He says: What are you doing Thursday? I said my schedule was open. He said he would call me back. He spoke to JD, called back and told me they were gonna jump into the deep end of the pool and put me on the gig. I said, oh, on piano? Jimmy said no, on sax. I had just borrowed it the night before! He said: Well, you’ve got five days to learn the songs.

So I learned the saxophone and the songs. Jimmy told me not to worry, just learn the sax parts and solos off the record. I spent the next few days learning the horn, figuring out the scales…

Jimmy Sutton: The guys were scared. Like, where did you get this guy from?! I said, “Give him a couple of weeks.”

Doug Corcoran: “He’s not a sax player, he’s a musician.”

Jimmy Sutton: He had an ear.

Doug Corcoran: The first show was at the Fine Line in Minneapolis. It was a sold-out show.

Jimmy Sutton: I think it might have been our first time in Minneapolis. But there was lots of radio support for “North Side Gal.”

Doug Corcoran: So we’re riding up in the van. I had not met anybody in the band besides Jimmy. I’m listening to the songs. I had never played the saxophone outside of my bedroom. I’d only been playing for a week. It’s the only time I can ever remember being nervous onstage.

Doug Corcoran: I sold it.

WIB: And after the show, they all came to you and said, “You’re in.”

Doug Corcoran: No, not right away…

(In part two of our interview, Doug talks about the pitfalls of being an innovator on the rockabilly scene, where it’s all about wearing the right pair of shoes.)