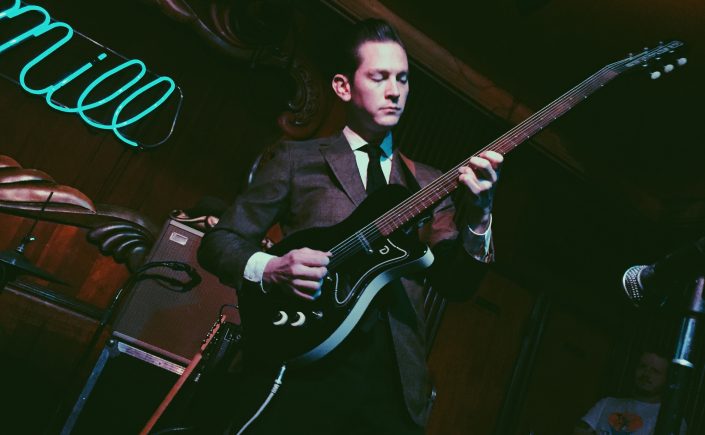 An interview with Doug Corcoran (Pt. 2)

Having traveled in blues circles for over 20 years now, I’ve seen the different ways musicians react to the purist attitude held by many long-time blues enthusiasts: They either conform, stick to their creative guns, move on to another genre or pack it in completely. While conversing with multi-instrumentalist Doug Corcoran for the better part of an hour, I learned something. Rockabilly fans can be every bit as conservative.

There’s a difference, though: On the style-conscious rockabilly scene, purism has as much to do with having the right image as with the music itself.

“The really hardcore rockabillies don’t care how good the music is. It’s more about if the band wears the right things. Are they playing vintage instruments? Do they have an upright bass? It’s more about what it looks like, does it fit their lifestyle.”

Corcoran has spent a fair amount of time in each of these parallel worlds, both blues and rockabilly. For the past five years, his main gig has been as the saxophonist and guitar player in JD McPherson’s band. McPherson is among the more popular figures in contemporary rockabilly despite incorporating elements of soul, R&B, blues and garage rock in his sound. Hardcore fans don’t take kindly to this eclectic approach, says Corcoran, nor do they approve of the thick beard worn by drummer Jason Smay  – a rockabilly no-no. “They can’t wait for him to shave it off.”

In part one of our interview, conducted smack dab in the middle of a wildly successful European tour, Corcoran spoke of his origins in Chicago and how he hooked on with JD McPherson in the summer of 2012. He talked about the subtle shift that had taken place within the scope of McPherson’s most recent album Undivided Heart & Soul – one that left the university trained trumpeter-cum-saxophonist playing guitar almost exclusively. Our backstage chat resumes roughly three hours before that evening’s gig at De Casino in the Belgian city of Sint-Niklaas.

Who Is Blues: The venue hosting tonight’s show billed JD McPherson as “The Future of Rockabilly.” Do you think that’s appropriate?

Doug Corcoran: I’m not one to put a label on anything. There’s good music and bad music.

WIB: But that’s the way it should be, right? If you try to stick to one genre – blues, rockabilly, whatever it is – it’s very limiting.

Doug Corcoran: For sure. I like where we’re going musically. There are so many more possibilities. I hate to say it’s going in more of a “rock” direction. What’s the difference between rock, rock’n’roll, rockabilly … those are smeared boundaries. But we’ve played some arena shows opening for other bands. And we’ve toured with and are friends with other bands that have a different sound. In those massive venues, there’s a certain sonic quality to the music that lends itself to a huge venue. There’s more low end. The kind of sound that makes your chest vibrate.

Over the years I’ve seen bands and loved the style of music they do, and I’ve wished there was a way to put that across sonically in the same powerful way as these bands from other genres. I just can’t picture Little Richard or Ray Charles playing in an arena and having the same kind of impact of, say, Bob Seger’s show. Or a band like Lucius, who we’ve toured with, that has way more of a pop sensibility. The way the bass sounds, the synthesizers, the drums.

On the other hand, one of the things I like about rock’n’roll is that it doesn’t have that overpowering bass that rattles your brain. For the first three or four years of touring, before we had our own sound man, every night we’d have to ask the sound man to take the bass frequencies out of the kick drum. Take all that bass out of there! We’re not a rock band! It sounds ridiculous in our style of music. 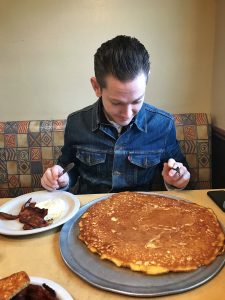 Now, we’re going in a direction where you can put a little bit of that back in, so that people are feeling it in their chest. Especially on a live show, that makes a huge difference. The physical impact. Not just what people are hearing and the meaning of the lyrics – we’ve always had that. But there’s something about the physical experience of being at a show, too.

And I think one of the next steps is the visual experience. We’re not there yet. But if we ever get a lighting guy…

WIB: Visuals can add a lot to a show if they’re done well.

Doug Corcoran: I haven’t been to very many big rock shows as a spectator. Like arena shows. The first one I went to was U2 at the United Center in Chicago. I like a lot of their music from the 80s. This was the Vertigo tour. They had a big stage that goes around and it lights up and it all matches up with the lighting boards all around. I’m not saying we need to do all that. But it’s really entertaining! It’s like theater for all the senses. It’s more of an immersive experience than hearing a loud band and seeing them at the other end of the room.

WIB: How has the response been so far to Undivided Heart & Soul?

Doug Corcoran: The thing with the second and especially this third record is … it will bum some people out. “Well, I liked the first record. That’s when it stopped being cool.” I think we’re all happy to leave those people in the dust. But I hope they feel included and expand their vision of what the future of rockabilly could be.

So maybe JD McPherson is the future of rockabilly. Rockabilly being fused with rock’n’roll and surf or new wave or whatever.

But there are a lot of people that are dead set on rockabilly staying in the past. That’s fine. Then go out and buy an old record. Why follow a new band? Because everything has already been done. You’re not gonna record something that’s better than what Ray Charles did. And if you try to copy it exactly, it’s definitely gonna be worse.

WIB: There really are a lot of parallels to the blues.

WIB: And have it be better than Muddy Waters?

Doug Corcoran: Yeah. I’m in the blues scene in Chicago and I really consider it to be more of a live art. I think this band could do a blues album and it would sound more like the first record, where we’re trying to re-create a style. I bet it would sound really cool. And it would sound old. And people would say, “Oh, is that an old record?” I’d say, no, it’s a new one. “Well, I already have an old one! Why would I need a new one?”

Who Is Blues would like to thank Doug Corcoran for taking the time during a busy tour. Here’s a taste of his saxophone on JD McPherson’s “It’s All Over But The Shouting.”