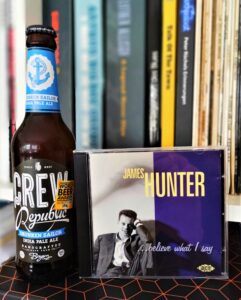 Following that rather lengthy introduction, I think we should get right to some music. Here’s “Two Can Play,” the opening track and one of Hunter’s nine original songs on Believe What I Say.

Imagine what it felt like to walk in on the band’s soundcheck in 1998 (I’m guessing), accustomed to squealing blues guitar licks and staggering shuffle beats and to get a blast of that! Right away, I could tell James Hunter’s five-piece was a completely different animal. His guitar playing was lean and efficient. The rhythm section had a bounce in its step. Most striking were the twin horns, the baritone and tenor sax, right on time and giving the music plenty of bottom. I took a liking to it right away.

Hunter himself was a tougher nut to crack. I’d gone to the club on assignment, asked to interview the singer/guitarist for a German blues quarterly. If Hunter was grateful for the attention, he certainly didn’t let it show when we met backstage. Perhaps he was playing it cool, in line with the Sinatra-esque poses of his record covers. Or maybe his reserve about the interview merely reflected my own limited knowledge of his musical heroes.

I heard Ray Charles, Sam Cooke and James Brown as obvious influences on Hunter’s sound. And, c’mon, you hear them, too! Hunter – making clear that he was far more erudite in this area – told me Jesse Belvin was his favorite singer.

I’d never heard of him before.

So Hunter was a little impatient with me. I was still fairly new to blues, jazz and R&B at that point. I still had to catch up on a century’s worth of music. Hunter’s nod to Jesse Belvin and The “5” Royales was, in that sense, a part of my education.

Still, take a moment to listen to “I’ll Walk Away” and tell me you don’t hear the second coming of Sam Cooke.

We’ll get to the beer on the other side.

Damn good singer, he is.

Drunken Sailor India Pale Ale is one of eight offerings from Crew Republic, a relatively new Bavarian brewer. For what it’s worth, it was awarded the title of World’s Best IPA as part of the 2020 World Beer Awards. That means it impressed at least one panel of experts. That’s not me, so I’m going to rely on a few James Hunter song titles to tell you about it.

Two Can Play. Oh yeah. It’s just you and me, kid. Open up and come to papa.

My nose basks first in the beer’s invigoratingly hoppy aroma. The deep coppery color is Out Of Sight.

I go a step further. I take a few sips, then dive more deeply into this chalice of foamy goodness. Indeed, its pleasures are many. The hoppiness is balanced by a lightly sweet, biscuity flavour, presumably from the caramel malt in the recipe. One 330ml bottle with an ABV of 6.4% will not be enough to turn me into a drunken sailor, but doubtless, by the time it’s empty, I will be feeling good Way Down Inside.

My overall reaction: somewhere between I Wanna Get Old With You and Hallelujah I Love Her So. 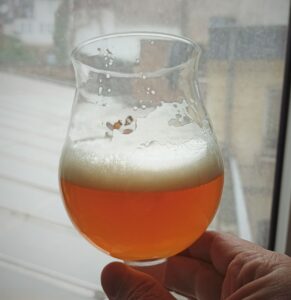 I see that “Turn On Your Love Light” is not included on every edition of Believe What I Say, but that’s the song I want to close with. “Love Light” was originally a hit for Bobby Blue Bland in 1961. Five years later the song turned up on Them Again, the second album by Them, where Van Morrison famously featured on lead vocals. Many, many moons later, Morrison employed James Hunter as a backing singer, then Morrison returned the favour by guesting on two of Believe What I Say’s 14 tracks. An Englishman and an Irishman walk into a Bobby Bland classic …

Don’t forget: This relentless charge forward does us little good. Don’t get suckered into it. Press the pause button on life. We all know how it ends anyway! So do nothing. Try it on for half an hour. Then listen to a long-forgotten album.

A glass of beer is not a mandatory part of the exercise, it’s just the way I like to do it.

Hope to see you again next week.