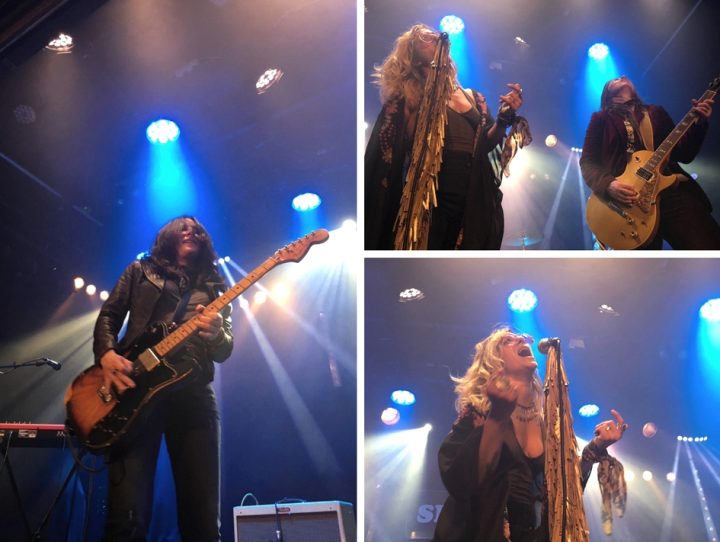 The show at Spirit of 66 in the Belgian city of Verviers was part of the quintet’s springtime swing through Europe. Since there was nothing closer, a carload of us made the 90-minute drive from Cologne across the border. As a venue, Spirit of 66 is both cozy and cool, decked out in American paraphernalia and offering tasty and potent native beers. Bu-ut … I’ve never seen the place anything near full. There are altogether too many concerts going on there. An embarrassment of riches. In any case, this Monday night show drew only a light turnout.

That’s where Jane Lee Hooker’s greatness shines through. The band played as if the joint were packed and they wanted every last soul, from the bartender to the coat check guy, to go home happy, sweaty and satisfied.

Inevitably, flamboyant vocalist Dana “Danger” Athens is the visual centerpiece. She puts lots of muscle into her singing, but can surprise by showing off her softer side, as she did on this evening, taking a seat at the keyboard and delivering a soulful and sensitive reading of her own “How Bright The Moon.”

“How Ya Doin’?” – Jane Lee Hooker’s invitation to party – came early and set the tone. Let’s keep it going all damn night. The lean, dynamic rock and roll of Spiritus dominated the early portion of the set, recalling the sounds of the Stones and Velvet Underground, Lynyrd Skynyrd and Richard Hell & The Voidoids. (How can that possibly work? It does.)

There was also “Later On,” which invariably takes me to the roof of the Apple Corps building in 1969. It’s got that scruffy, swaying, off-the-cuff feeling of the Beatles’ Let It Be sessions. The five members of Jane Lee Hooker are confident enough to play loosely; on this original, you can practically see John Lennon standing next to them with his bare wood Epihone Casino, wearing the fur coat he borrowed from Yoko.

Later, the girls turned to the high-powered blues covers that populated their debut disc. More and more, the pure exhilaration of playing and performing kicked in. In the hands of singer Athens, Muddy Waters’ “Champagne & Reefer” was a sensual delight. “Didn’t It Rain,” a Negro spiritual most strongly associated with Sister Rosetta Tharpe, raised the roof as a frisky gospel rave-up. Johnny Winter’s “Mean Town Blues” careened down the pike, the fastest thing on four wheels, while Willie Dixon’s “Shake For Me” served as a last-ditch call to move what your mama gave you.

Jane Lee Hooker have grown their reputation largely on their strength as a live band. I’ve seen them three times now and they are always on point. They seem to genuinely love what they do. They’ve got the chops. And they never mail it in. It’s a good time just waiting to be had.