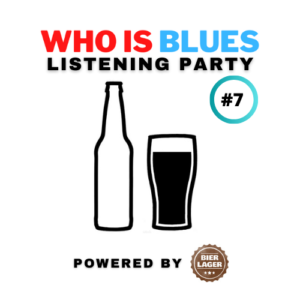 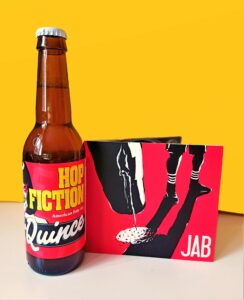 The five-piece outfit A Contra Blues has seven albums under its belt. Of those, Jab is the most daring and possibly most electrifying, a genre-bending mix of rockabilly, blues, gospel, surf, R&B and country. Despite having won the European Blues Challenge with A Contra Blues in 2014, lead singer Jonathan Herrero – a big bear of man who keeps busy with a number of musical projects – rejects the blues label and once wrote a song about it, tongue firmly in cheek: “IDKWTBI.” It’s on 2017’s Heart & Guts, an excellent album in its own right. “IDKWTBI” is an acronym for “I don’t know what the blues is.” Herrero doesn’t want to know and is tired of the discussion. He prefers to adhere to Willie Dixon’s philosophy: The blues is the roots and the rest is the fruits.

The Latin-flavored “Coyote” features the guitars of Héctor Martín and Alberto Noel Cavillo and is one of the many colorful treats in the cornucopia that is Jab.

I happened to be at the European Blues Challenge the year A Contra Blues won it. It was a two-day affair in Riga, Latvia. Eighteen acts from 18 countries took the stage, with each of them playing a 20-minute set. The competition was stiff: Young, tattoed singer Ina Forsman was there representing Finland, not quite as polished as she is today, as was Denmark’s Pristine, who have done quite nicely for themselves on the bluesrock circuit. But when A Contra Blues had their moment and Jonathan Herrero opened his mouth to sing, you kind of knew it was all over. The judges couldn’t not give them the prize.

The band exudes an infectious energy and joy onstage and on record. At the same time, there’s a weightiness to what they do, a soulfulness, that keeps it from ever feeling shallow or superficial. The music goes deep and Herrero’s exceptional vocals are at the heart of it. I hear some Stevie Wonder in there. George Michael, too. Herrero can sing it cool and mellow or sharp-tongued and for the first time on Jab – in the album’s rockiest moments, on songs like “Cimarron” and “Machete” – he pushes his voice to its screeching limits.

I’d like to bring it down, though, with Jab’s quietest track “The Silence After The Scream,” while I turn my attention to my waiting glass of ale …

Hmm. Can a beer be described as twangy?

Hop Fiction is a hazy, pleasingly bitter APA brewed with Galena, Centennial and Citra hops. It weighs in at 5.4% ABV and 40 IBU, middle of the road. But those parameters don’t tell the story any more than Pulp Fiction‘s cast list or running time do.

I’m tasting/smelling a veritable jukebox of flavors and aromas jumping out of the glass. Hop Fiction awakens the olfactory nerve with the funky pine-scented spice of a desperado hideout. (I’m hearing “Girl, You’ll Be A Woman Soon.”) The first citrusy sip zaps you onto a pink, orange and yellow, palm-edged beach. (“Surf Rider,” Jules’ and Vincent’s exit music. ) The subsequent mouthful dances barefoot over the taste buds like John and Uma wiggling across the floor to Chuck Berry’s “You Never Can Tell.”

It’s an exceptional beer that – together with today’s brilliant sunshine, suggestive of the coming of spring, and the music, transporting me to warmer, friendlier climes – has me all fired up and ready to go. 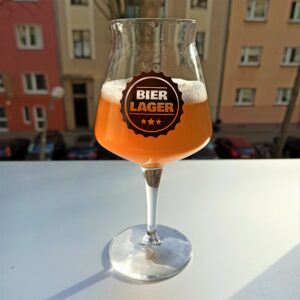 Let’s go out on a high note with a balls-to-the-wall live clip of A Contra Blues doing “Machete” for Spanish radio. I’ve got a bottle of Estrella Damm, Barcelona’s favorite beer, waiting on deck. Because sometimes, one beer is simply not enough.

Hope to see you back here next week.