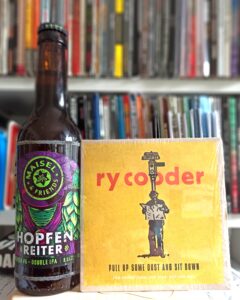 If you got the Dating Game Reference, then you’re at least as old as me.

Ry Cooder’s quietly revolutionary Pull Up Some Dust And Sit Down felt like the right fit for this casual stroll through my old neighborhood – Köln-Mulheim – then as now populated primarily by immigrants from Turkey and northern Africa. The sound of the album is rural and rooted in American musical traditions from both north and south of the Mexican border. There’s a clash of cultures and “us vs. them” vibe running throughout.

Let’s start with “If There’s A God.” The song paints an image of a harsh and restricted Heaven where poor folk of all colors and backgrounds are unwelcome.

Köln-Mülheim is not at all a bad part of town. I felt that while living there and again today, despite the neighborhood’s less than stellar reputation. This sunny morning, before I hit the area’s main shopping mile, I walked through peaceful residential streets, admiring blossoming cherry trees and the unassuming comings and goings of the people, birds and squirrels who live there.

The apartment I shared with my first wife was large enough for two and had a rooftop garden all its own where I planted tomatoes, sunflowers and hot peppers from seed given to me by a Ghanaian friend. In summer, you could sit out there until well into the evening, enjoying a drink as cargo planes in descent to Cologne/Bonn airport passed overhead once every couple of minutes.

What are we drinking today? That would be Hopfenreiter Double IPA from Maisel & Friends, a fourth-generation family-owned German brewer. It’s a collaborative beer that differs from year to year depending on the participating companies. Last year was the sixth year of the collaboration, so technically, we’re pouring Hopfenreiter #6 (or Hopfenreiter 2021), to which six breweries from Germany, Estonia and the US contributed.

As we get acquainted with this 70 IBU, 8.5% ABV powerhouse, let’s spin another cut from Pull Up Some Dust And Sit Down – Cooder’s ultra-slow, chilling, six-minute “Baby Joined The Army.”

Hopfenreiter #6 makes a very good first impression. The deep, honey-colored liquid that fills my glass is unusually pretty. A whiff reveals a fruity, wine-like bouquet with citrusy and bready notes. The first sip – whoah! – is sharp, zingy and complex. The beer has lots of body and kicks like a mofo, but – like the Douple IPA I tried a few weeks ago, the Hop Monster – I’m asking myself: Do I like the taste? I mean really like it? Is more hops necessarily better? Hopfenreiter has more character than the somewhat generic brand of Kölsch I once lived across the street from. On the other hand, beer shouldn’t be a mental exercise. And if I’m in my head asking those questions, then maybe the one I’m drinking has missed the mark. My very subjective mark. Ever so slightly. 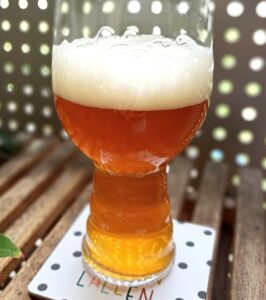 Back to Ry Cooder and the blues. The characters that populate Cooder’s songs wouldn’t drink craft beer of any kind. They’d drink whatever brand is sold at the nearest bodega. Or something harder.

I wonder what John Lee Hooker would drink. What you be drinking, Johnny? One bourbon, one scotch, one … Hopfenreiter??

Probably the most revered song on Pull Up Some Dust And Sit Down, “John Lee Hooker For President” is a tribute song of a different kind. Here, Cooder doesn’t sing about John Lee Hooker. He sings as John Lee Hooker. And pulls off a pretty damn good impression. In his imagination, there’s a world where Hooker has been elected to the White House, Jimmy Reed is Vice President and Little Johnny Taylor is a cabinet member. That sounds like a laid back, groovy musical world I’d like to live in.

A fantasy. But why not.

See you around … or as they say in the neighborhood: “Güle güle.”