♫ Solomon Burke, Don’t Give Up On Me

Today’s my 57th birthday. I feel moderately OK, calm, at peace. But my mood is not celebratory. Current world events, a black cloud as of late, are not the primary reason. It’s that number. 57. I have a problem with it.

My graying hair, my daily aches and pains, the slight gut that now sags from my scrawny frame – they all tell me that the number fits. It’s gotta be true. But I don’t want to be 57. I’m possessive of my time on this earth. I love life and don’t want to surrender it. I don’t want to count the days.

Turning back the clock is not an idea that appeals to me. My youth wasn’t all that wonderful. I like where these 57 years have taken me. I’m so much stronger in so many ways. If only I could have had the life skills I have now – the confidence bordering on fearlessness – when I was young and bursting with physical energy. I still have the passion and desire, but now it’s packed inside this aging, slowing, declining body.

I know what the solution is, what the goal must be today: To find my way from wishing things could be different to accepting what is. Being in the moment and arriving at a place of gratitude is always the answer.

Or maybe it’s music and beer. 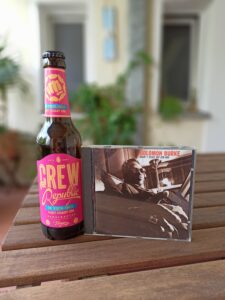 Here’s some music. Warm waters to wade into.

Flesh and blood. That’s what I am. Like everyone else. Solomon Burke was flesh and blood. He was a big man, larger than life I’d guess you’d say. He sure seemed that way onstage. He had something more than a voice – a goodness that transcended time and space. I’m thankful I saw him perform twice before he left this realm. The first time was at the Porretta Soul Festival in Italy during a beautiful time in my late 30s when I felt renewed. He was so close to his audience. So present. So there.

That record, Don’t Give Up On Me, had put him back in the spotlight. He was getting his due as a musical legend. People were lining up to work with him. So maybe Solomon was feeling a sense of renewal, too. On that stage, he was a king, a preacher, a man-mountain. His bulk required him to sit through his performance, perched on his throne, until the concert was nearly over. But that didn’t matter. He was unstoppable. You couldn’t not feel something.

Yeah, he was holding service. Preaching the gospel. But in a universal way everyone could relate to. He didn’t write “Diamond In Your Mind,” just as he didn’t write “Flesh And Blood” or, I believe, any of the eleven songs on Don’t Give Up On Me. They were written by Bob Dylan, Tom Waits, Elvis Costello, the cream of the crop. Burke made them his own. When he sang “Diamond In Your Mind,” he paired it with a brief sermon about hope and light, about holding on to that which gets you through. That was his interpretation. Always keep a diamond in your mind.

Having the chance to interview him a few years later, spending a half-hour on the phone, is something I’ll never forget. That’s a no-brainer. I mean who am I to be chatting with Solomon Burke? And then to have him be so charming, so down-to-earth. You never know until you get them on the phone. But Solomon was great. He put me at ease. He asked after me and my family. (Solomon Burke!) And when I told him my first child was on the way, due in just a few weeks, he gave me his blessing. That’s something I hold dear. Thank you, Reverend Burke.

Is this a Listening Party? Will I post this online? It’s been a few weeks and I’m not a slacker, so I suppose I will. And if it’s a Listening Party, then there’s gotta be beer. Which, hey, it’s my birthday. So here’s to 57.

I’ve picked out a beer that looks festive. Crew Republic’s In Your Face West Coast IPA. A brash pink, orange and blue label. For the occasion, I’m pouring it into my most colorful tulip glass – no matter if the beer is from Bavaria and the glass is from Amsterdam. The Crew Republic website says to expect a California feeling in these suds. I’ve had some really bitter and hoppy beers at the Listening Party lately and they’ve been a challenge. This one would seem to fit that category, too. So we’ll see.

Moments later: No need to worry! The 6.8% ABV In Your Face shines a pale clear bright yellow that sparkles in the glass. Its sweet berry and piney aromas announce themselves even at a distance, doubling the pleasure. On the tongue? Yes it is dry and bitter, but restrained enough to let the fruitiness come into play. In short: Hoppy Birthday to me! 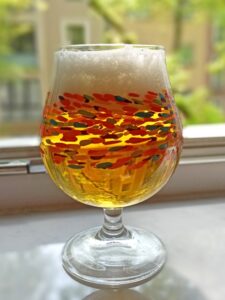 So now where do we go with this? Give me a sign, Reverend Burke.

There’s always tomorrow, or tomorrow night … hang in there, baby … one of these days I know I’ll get it right.

I remember being at a private party. This is roughly 20 years ago, so 2002 or 2003. “Don’t Give Up On Me” came on the radio. I tuned out of whatever conversation was going on in the room and zeroed in on the song. I’d never heard it before, didn’t know what it was or who was singing it. But it spoke to me. Come to think of it – it was definitely late 2002, when the record first came out. I wouldn’t see Solomon Burke until the following summer in Italy, and again later that year.

The song really resonated with me shortly after Italy, because the woman who’d made the trip with me, the woman I stood arm in arm with as Reverend Burke presided over the congregation, did give up on me  – out of the blue – just a few weeks later. It was the most brutal broken heart of my life. I listened to that song and album often while I begged her in vain to take me back.

What the song expresses, I suppose, is that we all make mistakes but that most if not all of us are striving to do better. And in the meantime, we ask forgiveness for our transgressions.

On Nick Lowe’s “The Other Side Of The Coin,” Solomon sings: There is much in life for which I could atone, but let he who is without sin cast the first stone. Who among us hasn’t made mistakes? Who hasn’t done shameful or embarrassing things?

At 57 I have done my share and despite what I said above about being stronger and presumably wiser now than in my youth, I don’t believe that any of us are immune to repeating our mistakes. We are all fallible. We all fall short and fuck up at times.

Perhaps the key is ultimately to accept it all. The good and the bad. The successes and the failures. Love and heartbreak. And aging. Not to pick and choose but to realize it’s all a part of what it means to be alive. Is that what you’re telling me, Solomon?