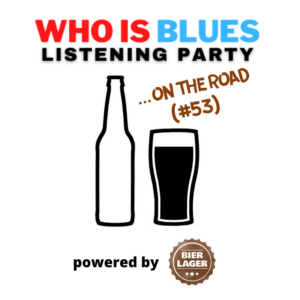 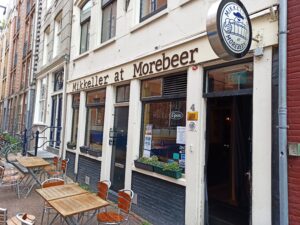 Now you may be asking: What does British singer Chris Rea have to do with any of this? Bear with me here.

In Amsterdam, I spent a lot of quality time I with my aforementioned daughter. She’s very interested in art and a huge fan of Dutch painter Vincent van Gogh. So we visited the Rijksmuseum and of course the Van Gogh Museum. We also soaked in Van Gogh’s late 19th century paintings at the immersive digital exhibition “Vincent Meets Rembrandt” at the Noorderkerk.

We don’t do a lot of museums back home – we’re probably too busy looking for shoes – so for me, as chaperone, the week in Amsterdam was unusually art-intensive.

Looking at paintings made me think of Chris Rea. While not restoring and racing historic motorcars or selling 30 million albums, he paints. And his art is all over Blue Guitars – a massive undertaking with which Rea aimed to trace the history of the blues from its African origins to the present day. An original work of his graces the cover of each of the eleven albums therein, which are themselves contained within a beautifully designed EarBook.

Blue Guitars is obviously not digestible in a single sitting. It’s more akin to a jukebox to pick and choose from at your leisure. CD #2, where the focus is country blues, gave us “Too Much Drinking.”

The name Mikkeller at Morebeer confuses me. Mikkeller is a rapidly expanding Danish brewer with a worldwide network of pubs. Morebeer Brewing is a much smaller Dutch entity. But Amsterdam also has a Morebeer tour whereby if you hit four specific craft beer bars in one day – one of them being Mikkeller at Morebeer – you get a free T-shirt. 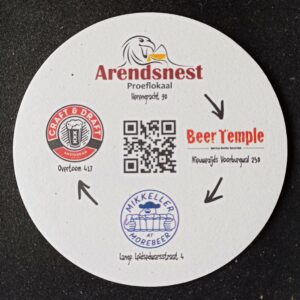 All you need to know is that Mikkeller at Morebeer, located at Lange Leidsedwarsstraat 4, has an excellent selection of draft, cans and bottles. Morebeer and Mikkeller are the stars of the show, but the pub also serves Gulpener, Uiltje, WarPigs and other goodies. Why run around town for a t-shirt when you can sit there all day sampling the wares?

I hit paydirt with my first selection, Dutch Eagle. It was listed #1 on the draft menu and is described there as a “thirst-quenching pale ale with a smooth hoppiness.” Hoppiness without bitterness? That’s right up my street. When the first 25cl glass arrived at our table overlooking the Leidsegracht, I took a whiff and my face lit up like a Christmas tree. It must have, judging by the slightly embarrassed “oh, daddy” look on my daughter’s face.

That half-pint, give or take, was so scrumptious I had to order another. More on that in a moment. First, here’s a non-drinking-related song that appears on CD #11 of Blue Guitars, where the stylistic focus is on the rock’n’roll of the ’60s and ’70s.

Dutch Eagle beguiles with a beautiful caramel color and fresh, fruity aromas that leap up and excite the olfactory nerves. The bready to biscuity character and ultra-smooth mouthfeel make you want to dive right in and backstroke around in it. After sampling the draft, I bought two cans inside the pub and weeks later, the experience is no different. Dutch Eagle tastes as good at home as it did whiling away the afternoon in Amsterdam. 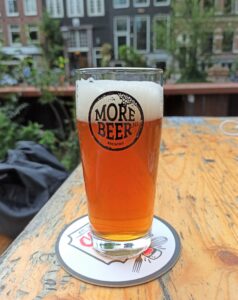 I had the pleasure of sitting down with Chris Rea when Blue Guitars was released. While chatting with him and discovering the depth of his passion for the blues, I asked myself inwardly: Where does a guy in his condition find the strength to pull off a project like this? Rea has battled stomach ulcers and survived pancreatic cancer. On the table in the hotel room where we met, I saw the array of pills he was taking daily to keep his body functioning.

The sickness is what drove him back to the blues. He didn’t want to play the rock star game anymore. He didn’t need to. Because as he would tell you, life’s too short.

I think no matter where you drop the needle on Blue Guitars, you can hear the commitment and the artistry and the life experiences that went into it. This isn’t someone playing the blues. This is someone feeling the blues.

I’m going to close it out with the tender “Last Drink” and a cheers to you for making the time. Bye for now.