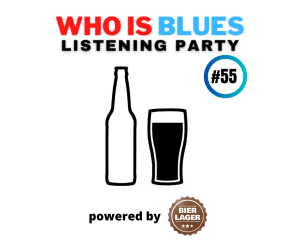 The blues is a lowdown shakin’ chill

You ain’t never had ’em, I hope you never will.

I’ve had writer’s block since the last Listening Party. A tangle of thoughts and emotions has been messing with my head so badly that I didn’t know where to go with this. There was no Listening Party last week and I was figuring on skipping out this week as well due to a lack of focus.

This morning I woke up and a new thought took shape. Why should I let writer’s block deny me the pleasure of a good beer? In fact, might not a few drops of “heaven water” (thanks, Angelique) help me get past it?

So, in a few minutes, after a cup of coffee and two slices of cinnamon toast, I’ll go down to the cellar where I keep my stock and bring up that 16 oz. can (or is it cans?) of Let’s Bee Homies Hazy IPA. Been waiting down there patiently for this boy to get himself straightened out.

I’ll crack it open a little later in the day and then we’ll see where life takes us, OK?

Alright, to be honest, it’s not just writer’s block. What’s been holding me back has been a mix of that and THE BLUES. That’s right, the blues. The blues is way more than this music we all love. It’s also that invisible specter that gets all up inside you, weighs you down and throws a gray veil of melancholy over everything you know and love. The blues. If you ain’t never had ’em … I refer you to the above Robert Johnson lyric.

What set me off was … nah … let’s have a little taste first.

Oh and a song. This one’s been on my mind ever since the blues came a-callin’.

Meanwhile I’ve been downstairs and in fact it was two cans of Let’s Be Homies.

You know, the mere act of walking down three flights to the cellar of our building, unlocking our storage room, then opening up my big box of beer gives me a lift. Because I see what goodies await me in the weeks ahead. Some of which I’d forgotten about. I take a real pleasure in it.

On top of that – the sun is shining today. A gift from above. 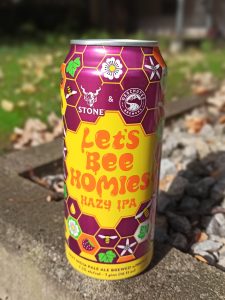 Let’s Bee Homies Hazy IPA is a west coast collaboration between California’s Stone Brewing and Oregon’s Deschutes Brewery. The “secret sauce” here is honey – orange blossom honey from SoCal and blackberry honey from the Pacific Northwest. Has me thinking of a particular blues classic. You can probably guess which one.

And there it goes … Let’s Be Homies filling the bottom two-thirds of my IPA glass with a deep golden body and the top third with a majestic white head as Slim Harpo sings about buzzin’ all night long. The scent is sweet and piney. The taste bittersweet. Bitter at first until the underlying sweetness of the honey comes through. Very hoppy and strong. The word bittersweet jumps out at me again – perhaps because that’s how life feels right now. But I do believe I can feel the fog lifting, see the clouds parting. 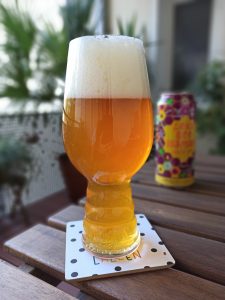 (On a side note: During the first several minutes of this tasting, the streaming service I use moved from Slim Harpo to Koko Taylor to Arthur “Big Boy” Crudup and has arrived at Bobby “Blue” Bland. And there it is again – the realization that on certain days at certain times, the blues is the only music that will do.)

Alright. As the Floyd Lee Band told us in Listening Party #41: The blues is a beautiful woman. And indeed: The rejection of a good-looking lass is what set my current blue mood in motion.

She’s not a lover nor a girlfriend, nor even a friend in the traditional sense of the word. She is someone I’d crossed paths with professionally. We’d got off on a good foot, I thought.

Yet somehow, in the course of doing my job, without any harm intended, I managed to turn her radiant smile into a raised middle finger. The prevailing warm sense of openness and affection between us went cold in a flash. And it didn’t feel good, no two ways about it.

(I’m halfway through the glass. Let’s Be Homies is a little heavy for my tastes.)

Now as Muddy tells us, you can’t lose what you ain’t never had. There was no rational reason for me to make a big thing out of what was essentially a misunderstanding. But feelings have a life of their own. No matter how many times your brain tells you to forget it or him or her and move on, once that worst old feeling gets inside you, it’s hard to get rid of.

That’s one of my very favorite songs no matter who performs it. One of Eric Bibb’s many gifts to the world. A lifesaver.

As I near the bottom of the glass, I’m starting to warm to the honey-flavored hazy IPA. Weird analogy perhaps, but this complex glass of beer is a bit like that woman who chose to give me the cold shoulder. She’s not a pushover. She’s got character. She believes in herself. And that’s cool. From her point of view, I was out of line and the person who was trying to drag her spirit down. Don’t you ever let nobody!

And that’s about all I’ve got to say today. We just need a song to close this out.